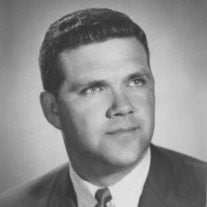 Myron Henry, (Hunk) Peace, 80 went to be with his Lord and Savior, October 13, 2013. “Hunk” was born September 29, 1933 in Fairfax, Oklahoma. Moved to Guthrie following his adored dad’s death in 1940 where he lived in various places, such as the local fire station, until “ma” Friend, who had a big family, and a little room, took him in. There he excelled, senior class president, captain ROTC, All State baseball 1952, honorable mention all-state football and was awarded scholarship to Oklahoma A&M but was unable to accept due to pryor sports injuries. His cousin, Billy Don, said “he ran like a deer”. In 1995 Myron was inducted into the Guthrie Sports Hall of Fame. Myron met Wanda at Guthrie High School and were later married in 1953. He received his bachelor’s degree from Oklahoma A&M and master’s degree from Oklahoma State University. Following college he taught history in the Stillwater Public School System and was freshman football and wrestling coach. In 1966 Myron was named director of college sales with Guaranty Mutual Life company and moved to Omaha, Nebraska. After 4 years Myron was offered a position as golf coach in Tulsa at Oral Robert’s University, then opening and managing the Aerobics building, where he and Wanda met many lifetime friends. In 1976, Myron accepted the position as Wellness Center Manager at Williams Co.; where he enjoyed working with all the members and made more lifetime friends. Through the years, Myron’s love has been foremost his faith in God and His Son Jesus Christ, his wife, family, and friends too numerous to even begin to mention. Myron was very proud of his Indian heritage and the legacy passed on to his family, As well as The Oklahoma State Cowboys, St. Louis Cardinals and The Kansas City Chiefs. Myron retired from Williams Co. in 1996, where he was quoted saying, “I don’t like the term, “ retirement”, I like to say I’m shifting gears.” Preceded in death by parents, Henry and Helen Peace, numerous aunts and cousins; grandson, Hunter Jackson. Survived by loving wife of 60 years, Wanda Peace; Daughter, Cindy and husband, Rick Jackson; Daughter, Lori and husband, Richard Watson; Son, Chad and wife, Laura Peace; Grandchildren, Kellen and wife Desteni Watson, Brian Watson, Aaron and Ellie Jackson, Reilly and Evan Henry Peace; Great Grandchildren, Brandon, Wyatt, and soon to arrive Carter Watson. We miss you dearly! Visitation will be Friday, October 18th, from 12:00 pm to 8:00 pm with the family receiving friends from 4:00 pm to 6:00 pm, Floral Haven Funeral Home, Broken Arrow. Funeral Service will be 12:30 pm, Saturday, October 19th, Floral Haven Funeral Home Chapel with Committal service to follow.

The family of Myron Henry Peace created this Life Tributes page to make it easy to share your memories.