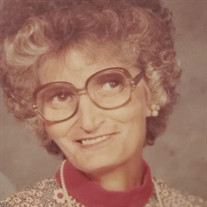 Myrtle Francis Scovel, 96, of Tulsa passed away peacefully January 7, 2022. She was born March 1, 1925 in Ryan, Oklahoma to Clarence Everett Wright and Katie Myrtle Wright. As a young girl Myrtle often took care of her nieces and nephews. When she wasn’t taking care of them she was hoeing and picking cotton in the fields alongside her sisters once she was big enough. Her brother passed away in the war so it was mainly her and her sisters picking the cotton with their father. She met the love of her life, Harold Scovel, was engaged for 6 years, married and raised three daughters together. She was a wife and a stay at home mother for a lot of years and proud of it. She didn’t work “outside” of the home until her least little baby graduated from high school. She then went to work for ORU where her husband worked and loved working with most of her co workers. She was a hard worker and excelled at everything she did. She was well liked by everyone she met but she did not put up with any bull and once she even chased one of the students off with the broom. She would never have hurt anyone but she expected them to respect her and she didn’t care who their parents were. She had taken a respect class that she was required to take so she knew exactly how the students should have acted in order to respect her. She worked there for 20 years and according to her she just quit she didn’t retire. She never met a stranger and if you knew her at all you knew she loved to talk. She had definite opinions and spoke her mind. She loved her family with all her heart and was proud of the life her and Harold had made together with their three girls. Harold and her walked their three kids to church every Sunday and any other time the Church had something going on. Harold and Myrtle were a big part of the heritage of Sheridan Christian Center. She loved to dress up and go to church and not just to be seen. No matter what the obstacles standing in their way they would always press through together with God as their rock. She loved shoes and it didn’t matter how bad her feet hurt her she just kept going. She walked or road the bus everywhere she went. She loved the color red. Christmas was her favorite time of the year because her and Harold’s wedding anniversary was on the 21st of December. She loved to mow her grass and continued to mow it until she was 94. She loved ice cream and her favorite kind was chocolate chip cookie dough. Once when she had gotten off work she was walking along eating an ice cream cone and fell. Well, she was more worried about the ice cream cone than she was the 14 stitches she had to have on her head from the fall. She was tough but she would do anything in the world for her family if she could. She had a heart of gold but you never wanted to cross her. Mytle Scovel was preceded in death by her parents, Clarence Wright and Katie Wright, 3 sisters, Velma, Dorothy and Sybil and 1 brother Clarence, husband, Harold Scovel (Roy) and 1 grandson Kyle Willders. Myrtle is survived by: 1 sister, Norma, 3 daughters, Elizabeth Shaulinskas of Oklahoma City, Priscilla Willders of Florida, Sarah Payne and son-in-law Robert Payne of Broken Arrow, 6 grandchildren, 9 great grandchildren, 3 great great grandchildren, numerous nephews and nieces and other relatives. Funeral services will be held 12:30PM, Saturday, January, 15, 2022 with interment to follow at Floral Haven Funeral Home.

Myrtle Francis Scovel, 96, of Tulsa passed away peacefully January 7, 2022. She was born March 1, 1925 in Ryan, Oklahoma to Clarence Everett Wright and Katie Myrtle Wright. As a young girl Myrtle often took care of her nieces and nephews. When... View Obituary & Service Information

The family of Myrtle Francis Scovel created this Life Tributes page to make it easy to share your memories.

Send flowers to the Scovel family.