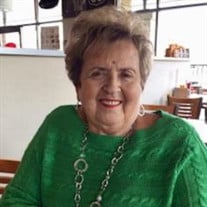 Nanette (Neely) Creamer was reunited with her husband Joe Creamer and other family members in Heaven on Thursday, August 19, 2021. Nanette, a descendant of the prominent Creek Indian Perryman Family in Tulsa, Oklahoma was born 03/18/1930 to Leona and Carl Neely and raised with the help of her beloved Aunt Wavel Ashbaugh and her Grandmother Addie Perryman Davis. Nanette graduated from Rogers High School (class of 1946) in Tulsa and remained connected to her alumni for many years. She met the love of her life, Joe Creamer when she was a teenager and married him at age 16. They were married for 46 years until his passing in 1992 and she never met anyone that could hold a candle to him. They loved dancing, bowling leagues, traveling, and spending time with family. They were active in the Tulsa Fraternal Order of Police where Joe retired after 20 years of service and the Tulsa Men’s Club. Nanette was also a member of Asbury United Methodist Church, Cedar Ridge Country Club, Tulsa Boys Home, The Tulsa Mrs. Club, and The Salvation Army Women’s Auxiliary as well as past President of the Women’s FOP Auxiliary and past President of the Women’s Real Estate Council. After raising their four daughters, Nanette started her real estate career at 38 and became well known in the Tulsa area with repeat clients and her weekly engaging newspaper ads advertising, “Nanette Sells Tulsa”. She was always a top producer and retired after 45 years. Nanette was pre-deceased by oldest daughter Cindy Christensen, and survived by daughters Pamela Axson, Denise Leslie, Teresa Rodrequez and son-in-law Peter Rodrequez. “Gram” as she was known is survived by 4 grandsons: Joe (Stephany) Christensen, Rusty (Leslie) Presley, Tim Presley, and Jeff (Nora) Leslie. Nanette was pre-deceased by grandson Jamie Presley and great-grandson A.J. Leslie. Also known as “GiGi” to her great-grandchildren: Tyler, Blake, Cade, Victoria, Fox, Nick, Baker, Sunny, Riley and Annabelle. Nanette was a supporter of the following organizations. Her family asks that if you are so moved, to consider a donation in her memory to one of the following: The Tulsa Boys Home - P.O. Box 1101, Tulsa, OK 74101. Tulsa Boys' Home (tulsaboyshome.org) The Salvation Army Women’s Auxiliary - The Salvation Army Tulsa Metropolitan Area Command, 924 S. Hudson Avenue, Tulsa, OK 74112. - The Salvation Army Tulsa Area Command (salarmytulsa.org) Visitation will be held from 4-6 p.m. on Monday, August 23, 2021 at Floral Haven Funeral Home. Funeral services will be held at 11 a.m. on Tuesday, August 24, 2021 at Floral Haven's Rose Chapel. Burial will follow at Memorial Park Cemetery in Tulsa. ***Services will be live streamed starting at 10:55 AM on Tuesday, August 24, 2021. To view the service live, please click on the following link: http://webcast.funeralvue.com/events/viewer/58973

Nanette (Neely) Creamer was reunited with her husband Joe Creamer and other family members in Heaven on Thursday, August 19, 2021. Nanette, a descendant of the prominent Creek Indian Perryman Family in Tulsa, Oklahoma was born 03/18/1930 to... View Obituary & Service Information

The family of Nanette Therese Creamer created this Life Tributes page to make it easy to share your memories.

Nanette (Neely) Creamer was reunited with her husband Joe Creamer...

Send flowers to the Creamer family.