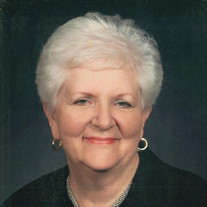 Nelda Ruth Wright of Pawhuska, Oklahoma passed away peacefully on Thursday, May 13th 2021. Nelda was born in Mingo, OK on July 23, 1931 to Walter and Lizzie Phelps. She lived in Oklahoma throughout her childhood. Her family moved to Barnsdall where Nelda attended and graduated from Barnsdall High School in 1949. She was a skilled and proud member of the Barnsdall Lady Panther basketball team. After graduation, Nelda moved to Pawhuska where she lived in a boarding house while waiting tables at the Duncan Hotel Café and later working the switchboard at Southwestern Bell Telephone. Shortly after moving to Pawhuska, Nelda walked into the First National Bank to open a checking account and met Fred McGuire Wright, Jr,. who would quickly become the love of her life. They married on September 4, 1950 at the First United Methodist Church in Barnsdall, OK. Nelda worked various jobs in Pawhuska and Tulsa before her mother-in-law Lennis Wright passed the baton of operating Wright’s Ready to Wear at 619 Kihekah Ave, which later became Wright’s Fashions and Gifts when owned and operated by Nelda and Fred for the next 36 years. Nelda was one of the most fashionable women in Pawhuska and helped her customers be just as fashionable. She valued her customers and called them all friends. Nelda was a generous employer and employed many family members throughout the years. She went above and beyond to ensure her customers needs were met. This included opening after hours for special circumstance, delivering items to the homebound or hospitalized and providing moral support beyond fashion advice. People came from surrounding communities just to shop with Nelda. She treated everyone as if they were her brother or sister in Christ. Nelda and Fred approached all that they did as a team. This included riding along with Fred while he was an independent long haul trucker delivering throughout the United States, supporting Fred as a minister at the Osage Indian Baptist Church, Baptist Mission Center in Oklahoma City and the Chapel of Peace Truckers Ministry. Nelda attended many churches in Pawhuska and was an active member of the community of faith in Pawhuska. She was most recently a member of The First United Methodist Church. She was a true woman of faith, showing her love of God and lived according to scripture. She shared her faith with her family and friends, bringing many to Christ and providing an excellent example of a Good and Faithful Servant. Nelda loved hosting large gathering of family and friend at the country home, affectionally known as “the farm”. Nelda had a talent for making everyone in her presence feel as if they were the most important. Nelda loved preparing meals and made even a simple sandwich feel like a production. Every gathering was most certain to involve some friendly competition. Nelda loved playing cards, dominoes and board games. She enjoyed meeting her friends for bridge club. Nelda said to always try fun things at least once or twice. She was always up for an adventure and found herself roller skating, ice skating, water skiing, boogie boarding, wind surfing, earning her pilots license, hunting, fishing, hiking, swimming and many other fun activities. She traveled from coast to coast and throughout the world, and did it in style of course. She is preceded in death by her husband of 63 years, Fred McGuire Wright, Jr., her parents Walter and Lizzie Phelps, four sisters: Elvena Dalrymple, Vera June Forbes Crane, Bernice Parkerson and Rena Fletcher Hall. She is survived by her three children: Colonel Bob Wright, US Army (Retired,) and wife Barbara of Bartlesville, OK; Commander Bill Wright US Navy (Retired), and wife Tammy of Westport, OK; and Vickie Wright Cease and husband Tim of Tulsa, OK; brother, Glen Phelps and wife, Jane of Broken Arrow; seven grandchildren: Jill and Tom Martinez, Dr. Mandy and Mike Swanson, Julia Wright, Holly and Chris Zollinger, Robert and Katie Wright, Lt. Kyle and Catrina Wright, US Navy, and Jacquelyn and Keith Wilson. Nelda was blessed with 21 great grandchildren and had been thrilled to hear that #22 is on the way. Viewing will be held on Tuesday, May 18th 2021 from 1pm to 6pm at Floral Haven Funeral Home 6500 S 129th E. Ave., Broken Arrow, OK 74012. Celebration of life will be held Wednesday, May 19th 2021 at 10:00am at The First United Methodist Church in Pawhuska at 621 Leahy Avenue.

Nelda Ruth Wright of Pawhuska, Oklahoma passed away peacefully on Thursday, May 13th 2021. Nelda was born in Mingo, OK on July 23, 1931 to Walter and Lizzie Phelps. She lived in Oklahoma throughout her childhood. Her family moved to Barnsdall... View Obituary & Service Information

The family of Nelda Ruth Wright created this Life Tributes page to make it easy to share your memories.

Send flowers to the Wright family.