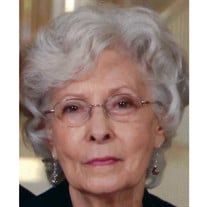 Nell Ruth McGlasson Drain was born August 26, 1930 to Mabel Ruth Watt and Otha Francis McGlasson in Okmulgee County, near Mounds Oklahoma on the family farm. She departed her earthly body December 22, 2021 and entered the presence of her Lord and Savior Jesus Christ, at the age of 91. Nell the oldest of 7 was born at the beginning of the Great Depression. Living on a farm, she would say that her brothers and sisters never experienced the hardships of the Depression, but that they were taught the disciplines of being thrifty and never wasting anything, she lived by those tenants all her life. Farming was hard and Chief (Otha) farmed with his family, the men did the heavy lifting, but everyone pitched in when it was harvest time. The stories Nell told of her childhood were vivid, and she would recount that when it was time to pick cotton, there would be a shade tree at the end of each row. They would pick cotton till the end of the row, then lay in the shade and drink water. Then work the next row. This may have been kind of like we would walk 5 miles uphill in the snow to school kind of story, but she would also say that Mabel would crank the shaft on the car to get it started and Nell at age 13, would drive Bob, Othella, and Shirley to school. In 1943, Mabel’s brother in-law was working in Illinois and convinced Chief and Mabel to move their family of 7, including twin baby boys to McLeansboro, Illinois for a work opportunity in the oil fields as a truck driver. After World War II, Nell met and married a soldier just back from service in McLeansboro, IL. They struck out to make a living and moved to Chicago. Nell attended and completed beautician school while in Chicago. The economy was good with all the service men back from the war and Chief and Mabel were able to save enough money to buy property back in Oklahoma. They bought a service station with 3 houses in Beggs on the property in 1946. Nell and Clyde Cross followed her family back to Oklahoma and Clyde worked at the service station. Nell and Clyde lived in one of the houses on the property. A few years later Chief was recruited by a company to operate an oil tank transportation business near Fox, Oklahoma. In 1948 they moved the family to Fox. Once again Nell, Clyde and new baby Davy followed the family to Fox. Nell worked as a beautician for many years while raising her family in Fox. Nell and her family relocated to Tulsa, Oklahoma in 1965, when the oil field industry declined in southern Oklahoma. After taking typing classes she worked for the Carpenters Union, Boy Scouts of America and Community Action Program in Tulsa. In 1968 she met and later married Donald N. Drain on December 31, 1969. They shared many passions, gardening, cooking, reading, fishing, camping, traveling, but none was more important than family. Nell encouraged by Don and her boss returned to school in the early 80’s and completed her bachelor's degree summa cum laude in Psychology in 1990, from Northeastern State University. Nell was a master at communication and organization. She used those skills as the Executive Secretary to 2 college Presidents. Nell and Don retired to a home overlooking Lake Hudson where they lived until 1999 when they relocated to the Tulsa area to be near family. In retirement, Nell enjoyed being a grandmother, cooking, tending her many African Violets and making a beautiful home for her family. Nell and Don continued to travel to visit family and friends. A vacation for Nell was a destination that ended with visiting one of her 5 brothers and sisters. As Alzheimer’s Disease robbed Nell of her present memory, it never took away her deep-rooted family memories. She was always trying to find a way to care, love and provide for her family, whether it was 1940, 1950, 1960, 1970…wherever her memories were at the time she was keenly aware of her family’s needs. Nell is preceded in death by her husband, mother, father, son Clyde David Cross Jr., brothers Garry McGlasson and Robert McGlasson. Nell is survived by her daughters Donna Kaye Roberts (Ronnie) and Lora Ann Phillips(Greg) both of Broken Arrow. Sisters Othella Gumm Marsh of Dallas, TX and Shirley McGlothlin of Bixby, OK. Brothers Jim McGlasson (Virginia) of New Iberia, LA and Gerry McGlasson of Georgetown, Texas. Stepdaughter Dawn Michelle Heber (Rob) of Sapulpa, daughter in-law Cindy Cross of Broken Arrow. Grandchildren: Jennifer Renee Cross, Lucas Wayne Cross (Manuela), Jillian Dawn Salmons (Nicholas), Taylor Vanwinkle, Grant Vanwinkle (Casey) and Joseph David Phillips. Great Grandchildren: Lisa, Jackie, Rachel, Anthony, Jason, Ameryk, Alaric, Ansyn, and Alese. Great-great Grandchildren: Natalya and Zoe. Many loved nieces and nephews. Visitation will be 4-6 pm, Monday, December 27, 2021, at Floral Haven Funeral Home The funeral service will be 3:00 pm, Tuesday, December 28, 2021, at Floral Haven Funeral Home Chapel. To view the services via webcasting use the link below: http://webcast.funeralvue.com/events/viewer/65944/hash:65C6616A7EB7E243 In lieu of flowers, donations can be made to Restore Hope Ministries @ https://www.restorehope.org

Nell Ruth McGlasson Drain was born August 26, 1930 to Mabel Ruth Watt and Otha Francis McGlasson in Okmulgee County, near Mounds Oklahoma on the family farm. She departed her earthly body December 22, 2021 and entered the presence of her Lord... View Obituary & Service Information

The family of Nell Ruth Drain created this Life Tributes page to make it easy to share your memories.

Send flowers to the Drain family.