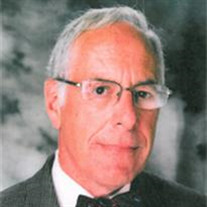 Nicholas D. Mamalis, MD joined his precious Lord after a courageous battle with renal cell cancer, June 30, 2011. He was surrounded by his family and friends. Dr. Nick Mamalis was born September 13, 1952, to Reverend James and Janet Mamalis in Knoxville, Tennessee. Dr. Mamalis was preceded in death by his father, Rev James Mamalis. He is survived by his loving wife of 30 years, Carla, his lifeblood, his two wonderful daughters who brought so much joy to his life Christina Christ, her husband Jacob and Stephanie Mamalis of Tulsa. His dear mother Janet Mamalis of Tulsa, OK and his beloved sister Emily Bartz, of Rochester Hills, MI, and her husband Rev William Bartz and their children Joanna (Evan), Maria and George. Spring Hill College, Mobile, AL conferred on Dr. Mamalis a BS, with summa cum laude award. Later he received his MD from Emory University. Residency was at Truman Medical Center in Kansas City, MO. GI Fellowship was completed at UAB in Birmingham, AL. Training and Boards in Internal Medicine and Gastroenterology were successfully completed. Dr. Nick started his GI practice in 1982 at St. Francis Hospital and was an active staff member for 28 years. He was a founder of Adult Gastroenterology Associates (AGA) and Tulsa Endoscopy Center, TEC. He worked there until his retirement in January 2010 due to health issues. Dr. Mamalis had a special place in his heart for his partners (his boys), patients, nurses, staff and colleagues. He belonged to several National Medical Associations and held leadership positions during his lifetime. Dr. Nick was an active member of Holy Trinity Greek Orthodox Christian Church where he assisted in services and chanting. The title of Archon Actouarios was bestowed on him by his all Holiness Patriarch of Constantinople. He loved riding his motorcycle and belonged to the Iron Butt Association. On his motorcycle trips with friends, he toured many regions in the US. He also traveled to 35 countries mostly teaching or on family trips. Family cookouts, parties and especially Easter celebrations were enjoyed by all. Dr. Nickâ??s passing will be felt by his family, many friends and patients. Special thanks go to Alan Keller MD and staff for their continued compassion throughout his illness, St Francis Radiology and St. Francis Hospice Care. Viewing will be held on Tuesday, July 5th, between 4:00 and 7:00 p.m. at St. Antony Orthodox Christian Church, 2645 East Sixth St, Tulsa, OK 74104. The Trisagion will begin at 7:30 p.m. The funeral service will be held on Wednesday, July 6 at 10:00 a.m. at St. Antony Orthodox Christian Church, 2645 East Sixth St., Tulsa, OK 74104. Interment to follow at Floral Haven, 6500 S. 129th East Avenue, Broken Arrow, OK 74012. If you would like to share your memories and stories of Dr. Nick, please go to w w w . c a r i n g b r i d g e . o r g / v i s i t / n i c h o l a s m a m a l i s m d In lieu of flowers, the family requests that donations be made in the memory of Dr. Nick Mamalis to Holy Trinity Greek Orthodox Church, 1222 South Guthrie Avenue, Tulsa, OK 74119.

The family of Dr. Nicholas Mamalis created this Life Tributes page to make it easy to share your memories.