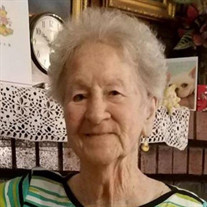 Norma Fay Yocum, Owasso, Oklahoma, went to be with the Lord on October 23, 2020. She passed at her home surrounded by her family. Norma, the third of five children, was born May 8 1929 to Lonnie and Flora (Todd) Rice in Tulsa OK. She grew up in North Tulsa and among her many jobs worked as a waitress, a clerk at the Tulsa Zoo, and as a crossing guard for Mills Elementary in Owasso. Her number one job was being the loving and caring mother for her four children and ten grandchildren. She was married to Alfred E. Yocum for 47 years. The family lived in Tulsa, Broken Arrow, and Bartlesville, OK and in Independence MO before returning to Tulsa and Owasso OK. Mrs. Yocum is survived by two sons, Alfred “Duke” (Paula) Yocum, Oak Grove, MO, and William “Bill” (Carla) Yocum, Lewisville, TX, two daughters Vicky Yocum (Dudley) Jones, Owasso, OK and Deborah Yocum (Robert) Storts, Owasso OK, and a sister Thelma (Gib) Sodeman, Avondale, AZ. She was preceded in death by her parents, sisters Maxine Trout and Murlene Sherman, and a brother, Bill Rice. Norma loved her ten grandchildren Rick (Stephanie) West, Robin West, Nicky Yocum (Brad) Fryman, David Yocum, Clay Yocum, Logan (Hannah) Jones, Lindsey Yocum (Lee) Burgess, Stacie Storts (David) Sutter, Garett (Catherine) Jones, and Amy Storts (Jared) Podolny. She also leaves behind nineteen great grandchildren. Norma was a “people person”. In addition to her adoring family, she especially loved the many young kids she helped cross the street to school every day. She also enjoyed her many friends from her YMCA water aerobics class. She also loved her new friends at Sequoyah Pointe Living Center in Owasso where she lived for a few years before returning to her beloved home. Mrs. Yocum’s ashes will be added to the final resting place of her parents at Floral Haven Cemetery in Broken Arrow in a private family ceremony. A small “Celebration of Life” is TBD. Norma Yocum asked that, in leu of flowers, send donations to “Rebuilding Together North Texas”, a non-profit organization supporting veterans, seniors, and others in need. Send donations to PO Box 251687, Plano, TX 75025 or online at www.rebuildingtogetherntx.org.

Norma Fay Yocum, Owasso, Oklahoma, went to be with the Lord on October 23, 2020. She passed at her home surrounded by her family. Norma, the third of five children, was born May 8 1929 to Lonnie and Flora (Todd) Rice in Tulsa OK. She grew... View Obituary & Service Information

The family of Norma Fay Yocum created this Life Tributes page to make it easy to share your memories.

Norma Fay Yocum, Owasso, Oklahoma, went to be with the Lord on...

Send flowers to the Yocum family.