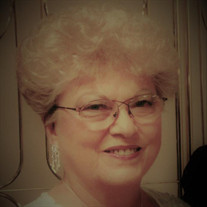 Madama Opal Fuller, 86 of Okmulgee, Oklahoma passed from this life on Wednesday, January 29, 2020 in a Tulsa hospital. On a farm southeast of Allendale, Missouri, October 10th, 1933, a baby girl was born to James (Jim) and Ruby Harding named Madama Opal Fuller. Her dad called her “Damie Opal” and upon arrival, as a freshman at Grant City High School (GCHS), Miss Hass called her “Madam Opal” (a-crawling-under-desk-experience). From that point on, her name was Opal which her grandmother and she were aware that they were the only ones with the name Madama, until later she traveled to France and saw the name several times. She attended Dry School for eight (8) years. Her teachers were Margaret Kelim, and Arch Finley. After eighth grade graduation, she started her freshman year at GCHS. She was the first one on the school bus and the last one off the bus, driven by Chester Scott. Her older sister, Sarah Ruth, also attended GCHS and younger sister Karol Anne attended GCHS, too. She wanted to say academics were her first priority, but admitted volleyball was her first love, along with cheerleading. The last day of school, Friday the 13th, about five (5) graduates decided to go to St. Joseph for the day. When crossing the South 169 Bridge, they traveled 100 mph in a white convertible borrowed from the driver’s uncle. No names mentioned here, on the grounds it might still incriminate some people. Where was the sheriff? A full life of good events, much too numerous to publish here. After graduation, classmates Roberta Jennings, Helen Cottrell, and she went to Des Moines, Iowa, and worked for an insurance company. They gained experience at working along with a “housemother” in the building where they lived. Their parents wanted to have a mother-away-from-home; they had one! Everyone kept her busy figuring out where they were and what they were doing? She never had to call any parents, though! This fun experience prepared them for college life in the dorm with a housemother, Mrs. Lively, at Chillicothe Business College (CBC), where Joyce Gabbert and she attended. They did get into trouble with this housemother, staying up too late and being too noisy. Her next venture was on a “real job,” a secretary at Western Auto in Kansas City, Missouri. Her boss had a secretary retiring after 25 years and he looked at her and said, “I’ll hire you since you came recommended by the college” (CBC). Of course, she was ready to work, to show him she could do the job. She did a good job until she met a handsome Air Force guy named Richard “Dick” Fuller from Oklahoma. He was stationed at Olathe, Naval Air Base in Kansas. They met at Play-Mor Skating rink in Kansas City. They married June 13th, 1954, at Grant City Baptist Church, 65 years ago. She quit her job at Western Auto and moved to New York, later to Tulsa, Oklahoma, then again to New York and later to Texas, then back to Tulsa, then retired to the Fuller family farm in Oklahoma. Dick worked for IBM for 38 years and she worked in education for 28 years. They have three (3) children, Dianne King who lives nearby along with her husband Mike and three (3) children Michael, Rachel, and Sarah, a son Brent of Tulsa and two (2) children, J.R. and Angela; a son Greg who lives in Colorado with his wife Cheryl and two (2) sons Gregory II and Christopher. All the grandchildren are sports enthusiasts – football, basketball, soccer, softball, baseball, wrestling and weightlifting. Both kept busy attending those athletic sports games and traveling. Together, they traveled to Bermuda, Cancun, Europe, the Caribbean Islands, Mexico, Canada, and all 50 states. Dick was president of the local school board. She did volunteer work and aerobic swimming. Church is a high priority since they committed their lives to Jesus Christ and involved themselves in His work ever since. Their life of steadfast faithfulness pays great “dividends” for all of their family and future generations. Opal is survived by her husband, Richard Fuller of the home; her three children, Brent Fuller of Tulsa, Oklahoma, Greg Fuller and his wife Cheryl of Westminster, Colorado and Dianne King and her husband Mike of Okmulgee, Oklahoma; four siblings, J. W. Harding and his wife Clara of Allendale, Missouri, Winona Cooper of Rockport, Missouri, Ruth Boedeker of Lee's Summit, Missouri and Karol Anne Chicken of Grant City, Missouri; seven (7) grandchildren, Michael, Gregory, J.R., Rachel, Sarah, Chris and Angela; eleven (11) great-grandchildren, Brooke, Remington, Jenna, Alayna, Isaac, Preston, Scott, Henry, Isla, Jayden and Judge; and many friends and extended family members. She was preceded in death by her parents, James and Ruby Harding and one brother, Harold Harding. Visitation will be held from 4-8 p.m. on Monday, February 3, 2020, at Floral Haven Funeral Home with family to receive friends from 4-7 p.m. Funeral services will be held at 12:30 p.m. on Tuesday, February 4, 2020, at Floral Haven's Funeral Home Chapel with burial to follow at Floral Haven Memorial Gardens. In lieu of flowers, the family has requested memorials be made to Allendale Baptist Church, Building Fund, P.O. Box 86, Allendale, Missouri 64420-0086. Memo: Building Fund (Opal Fuller), if you prefer.

Madama Opal Fuller, 86 of Okmulgee, Oklahoma passed from this life on Wednesday, January 29, 2020 in a Tulsa hospital. On a farm southeast of Allendale, Missouri, October 10th, 1933, a baby girl was born to James (Jim) and Ruby Harding named... View Obituary & Service Information

The family of Opal Fuller created this Life Tributes page to make it easy to share your memories.

Madama Opal Fuller, 86 of Okmulgee, Oklahoma passed from this...

Send flowers to the Fuller family.