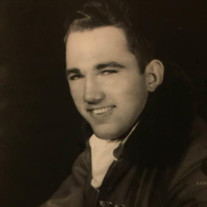 Orel Eugene Creech, 91, beloved Father and Grandfather, peacefully passed away Thursday, June 25, 2020 at his home in Tulsa, Oklahoma. Orel was born April 14, 1929 in Fitzhugh, Oklahoma to Jesse Eugene Creech and Jewel Francis Creech. Orel enlisted in the Air Force in November of 1948. He was honorably discharged after serving three years, nine months, and twenty days. He married the love of his life Betty Jean Fletcher on June 23, 1956 in McAlester, Oklahoma. He was employed by Western Electric. Retiring after thirty- six years having never missed a day of work. He was a member of First Free Will Baptist Church in Tulsa for over 50 years where he was an ordained deacon. And later became a member of Airport Free Will Baptist Church. He was always an avid supporter of the University of Tulsa athletic program and he and Betty faithfully attended all football and basketball games. He also enjoyed and regularly attended all his children’s and Grandchildren’s recitals and sporting events. He was a devoted and proud Papa and loved his children and Grandchildren unconditionally. He is preceded in death by his parents, two brothers, Jesse Cecil Creech and Charles Dewayne Creech and his wife and soulmate Betty Jean. He is survived by his brother Dennis Creech, of Oklahoma City, OK. Three sisters, Wanemah Kuykendall, of King George, VA, Olla Dee Bettis of Broken Arrow, OK, Mildred Willmette of Oklahoma City, OK, Sister in law Oma Faye Creech of Moore, OK. His son, Stephen and Donna Creech of Minden, Louisiana. Daughter, Callie Menken of Tulsa. Grandchildren, Ryan and Lacy Emerson, Dylan and Cara Nicholson, Dallas Menken, and Spencer Creech. Three Great Grandchildren, Laila, Ace, and Hendrix Emerson. And numerous nieces, nephews, and cousins. The family would like to thank Transitions Lifecare Hospice. A special thank you to Angela, Debbie, and Patty. Graveside Service will be 10:00 am, Friday, July 10, 2020 at Floral Haven Memorial Gardens Veteran's Field of Honor.

The family of Orel Eugene Creech created this Life Tributes page to make it easy to share your memories.

Send flowers to the Creech family.