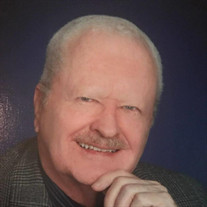 Otis Harold Barnes, known as Harold, was born in Lee Creek, Arkansas on June 19, 1937, to William Otis Barnes and Flora Emma Hopkins Barnes. He passed away on Wednesday, August 26, 2020, in Tulsa, Oklahoma, after a short illness. Harold and his sister, Pansy, both became deaf due to a high fever with influenza when he was 6 months old and she was 2-1/2 years old. The family lived in Van Buren, Arkansas, until Harold was 5 years old, when his mother, two older sisters and he moved to Tulsa, Oklahoma. He attended Longfellow Elementary in the deaf class and graduated high school in the first deaf class at Central High School in 1955. Afterwards, he attended night classes at several local colleges, including Benedictine Heights College, for math and drafting classes. He enjoyed sports and played basketball for a church team, was on a swim team, fished, bowled, and played golf. He met the love of his life, Joyce Ann Reeves, after one of his basketball games and started dating. They married in Berean Baptist Church, Tulsa, on May 18, 1957. Harold and Joyce were blessed with two children, Scott and Kimberly. Harold’s career focused on engineering and drafting for steel manufacturers in Tulsa, including Slagle Manufacturing Corporation and Nutter Engineering from which he retired in 2003. Harold and his sister, Pansy, were regularly active in the deaf community and had many wonderful friends. He most recently was a member of South Tulsa Baptist Church and became special friends with Cliff and Marty Richard, Adelynn Richard, and Tuffy and Doris Goforth. Harold was preceded in death by his father, William Otis Barnes; his mother, Flora Reynolds; his son, Scott Harold Barnes; his sister, Pansy Sue Bradshaw; two half-sisters, Gertrude Johnson and Delores Reed. He is survived by his daughter, Kimberly Mozingo (Earl); his former wife, Joyce Barnes; his sister, Patsy Slagle; his half-siblings, Otis Darryl Barnes, Otis “Tudy” Barnes, Ronald Barnes, Alva Gene Barnes, Lynda Lovejoy, Rosella Vanderlyke, Anna Faye Trentham, and Darrell Wayne Barnes; and many nephews, nieces, grand-nephews, grand-nieces, and cousins. If you would like to make a memorial donation in Harold’s memory, please consider the Tulsa Speech and Hearing Association, 8740 E. 11th Street, Suite A, Tulsa, OK 74112, or online at www.tsha.cc Private family service.

Otis Harold Barnes, known as Harold, was born in Lee Creek, Arkansas on June 19, 1937, to William Otis Barnes and Flora Emma Hopkins Barnes. He passed away on Wednesday, August 26, 2020, in Tulsa, Oklahoma, after a short illness. Harold and... View Obituary & Service Information

The family of Otis H. Barnes created this Life Tributes page to make it easy to share your memories.

Send flowers to the Barnes family.