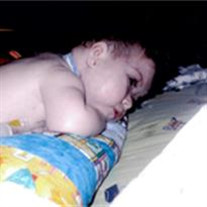 Parker Boyd Wade, born at 11:17 p.m. on January 13, 2010, who couldn’t wait forty-three minutes for his dadda’s birthday, began a journey that rocked the lives of many. Born at the Indian Hospital in Claremore, Oklahoma, he struggled to breathe and was transported by helicopter to St. Francis Children’s Hospital in Tulsa; thus began his life, an all-too-short chapter, which affected everyone in contact. There was no reason for his illness; there was no name for his disease. After almost two months in the NICU, two surgeries and five procedures, he came home. He played and spent precious time with his parents and restricted visitors. One month later, he was admitted again into the Children’s Hospital. This stay led to an anticipated open heart surgery with two months of recovery, including the discovery of an underlying lung disease. The severity of this lung disease remained unknown but would later take his life. On July 14th, after a tracheostomy surgery, Parker came home on his momma’s birthday. At six months old, he discovered his face and hands. He enjoyed touching his parents’ face, holding their hands, kisses and holding his head up all by himself while being bounced. On weekends, his parents and he would nap together. On Tuesday, the 24th of August, he was taken to the hospital and admitted for the last time. Parker Boyd Wade is survived by his parents, Jason (DaddaBear) and Kindra (MommaBear) Wade of Claremore and grandparents, Darrell (Grandpa Dil) and Angie Wade of Coweta, Christine (Nama) and Mike Pelfrey of Langley, and Ray (Papa) and Theresa (Mema) Darnell of Claremore. A celebration of his life will be held on Tuesday, August 31, 2010, 3:00 PM in the Floral Haven Funeral Home Chapel, Broken Arrow, Oklahoma. Interment will follow in the Garden of Angels, Floral Haven Memorial Gardens.

Parker Boyd Wade, born at 11:17 p.m. on January 13, 2010, who couldn&#8217;t wait forty-three minutes for his dadda&#8217;s birthday, began a journey that rocked the lives of many. Born at the Indian Hospital in Claremore, Oklahoma, he struggled... View Obituary & Service Information

The family of Parker Boyd Wade created this Life Tributes page to make it easy to share your memories.