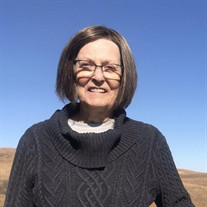 Patricia Cheryl Caldwell Searcy was born on May 7, 1944, in Blackwell, Oklahoma to Benjamin Frierson Caldwell and Edith Eleanora Deffner Estes. She grew up in a large close knit family who gathered often. The family moved around the US and finally settled back in Blackwell. Pat was active in school, participating in Church, Drama, Choir, Girl Scouts, Newspaper Club, FHA and many others. After graduation from Blackwell High School in May 1962, she attended NOC in Tonkawa, OK and was on the Mavette drill team. Her first full time job in 1963 at CrediThrift, took her to Wichita, Kansas. She married her boss, Bryan Searcy in 1965, eventually settling in Tulsa, OK to raise a family with three children. Education was an important part of Pat’s life. She pursued advanced degrees at TU and NSU while working as a dedicated school teacher at various Tulsa Public Schools and Jenks High School. One of her proudest accomplishments professionally, was achieving her Master’s Degree in Special Education. She touched many lives and was affectionately known as “Sergeant Searcy” to many of her beloved students. Pat retired in 2006, after 35 years to enjoy some well-earned relaxation. Family was precious to Pat. Spending time with them and being surrounded by family photos were cherished greatly. She had a tremendous passion for learning and reading. Some of Pat’s favorite memories were family gatherings, attending her children and grandchildren’s activities, traveling with family/friends in the U.S. and abroad, attending performing arts and supporting charities. She took pride in being an independent, self-sufficient hard working single mother. After moving to Broken Arrow, OK in 2016, she attended First United Methodist Church. Even after her health declined and attending was not always an option, Sunday morning services were always on the TV. Pat is survived by two daughters, Cheryl Murphy of Tulsa, Oklahoma and Sally Searcy of Broken Arrow, Oklahoma; one son, Benjamin Searcy and wife Rachel of Germantown, Tennessee; two brothers, Mike Caldwell and wife Cynthia and Clarke Estes and wife Lisa all of Ponca City, Oklahoma; sister Kay Anderson and husband Ken of Lakewood, Colorado; Step-father JC Estes of Blackwell, OK; Five grandchildren, Ryan Murphy of Norman, Oklahoma, Sara Graham of Broken Arrow, Oklahoma, Grayson, Lindley and Adalynn Searcy of Germantown, Tennessee; one great grandchild, Cruz Murphy of Norman, Oklahoma; five nephews, Jason Caldwell, Justin Caldwell, Tanner Estes, Archer Estes, Ryan Anderson; one niece Renee Ereckson. Pat was preceded in death by her parents. The family requests that donations be made to American Heart Association. ***FOR THOSE THAT CANNOT ATTEND THE SERVICE IN PERSON, CLICK ON THE FOLLOW WEB ADDRESS: THE LIVE STREAM WILL START AT APPROXIMATELY 2:45 pm IF YOU DO NOT SEE THE LIVE FEED, PLEASE REFRESH THE PAGE UNTIL IT APPEARS*** http://webcast.funeralvue.com/events/embed_viewer/26659" target="_blank">View Funeral Webcast

Patricia Cheryl Caldwell Searcy was born on May 7, 1944, in Blackwell, Oklahoma to Benjamin Frierson Caldwell and Edith Eleanora Deffner Estes. She grew up in a large close knit family who gathered often. The family moved around the US and finally... View Obituary & Service Information

The family of Patricia Searcy created this Life Tributes page to make it easy to share your memories.

Send flowers to the Searcy family.