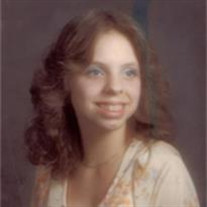 Patricia (Patty) Sue White of Tulsa, Oklahoma left us here on earth on Tuesday August 10, 2010 after a long series of medical problems.Â  Patty was bornÂ  on July 28th 1959 in Spokane, Washington and since her father was in the military she got the pleasure to live in serveral places around the worldÂ before the family finally settled in Tulsa when she was eight years old.Â  She grew to start her own family at the age of twenty-one and was blessed to have three children who went on to give her eight grandchildren at theÂ time of her passing.Â Â There wasn’t anything Patty loved more than her granchildren and she could usually find a way to playÂ with them no matter how bad her health had gotten.Â  Everyone whoÂ knew Patty knew how much she loved and looked up to her mother.Â  Patty’sÂ stepfather was a truck driver which helped develop her loveÂ to travel andÂ collecting little keepsakes from every placeÂ she visited.Â  She also loved country music, either dancing to it or going to any country concert she could get a ticket to.Â  Patty was a member of both the TulsaÂ Moose LodgeÂ 1222Â and PlainviewÂ BaptistÂ Church.Â  InÂ Patty’s passing she has joined her mother Virginia Hackett, her father Charles Vanmeter, her stepfatherÂ Neil Englett, and her big sister Charlene Hopkins.Â  She is survived by her three children and their spouses Tim White & Trish Hill, April & Jeff Berry,Â and Samantha White & KippÂ Clodfelter; Her grandchildren Chase Hill,Â Jakob Black, Charlene Berry, Wesley Funk, Serenity Eckstein, Evan Eckstein, Coltyn Berry, Timmy White III and a Berry baby boy on the way.Â Â She is also survived byÂ her sisters and their spouses Lynn Freeman & Karen Perryman,Â Tammy West, Sandy & Tom Ferguson, Cindy &Â Kurt Mathena,Â  Wendy &Â BillyÂ Jo Wenzel, Molly Vanmeter, Jana Vanmeter, andÂ Leslie Vanmeter.

Patricia (Patty) Sue White of Tulsa, Oklahoma left us here on earth on Tuesday August 10, 2010 after a long series of medical problems.Â  Patty was bornÂ  on July 28th 1959 in Spokane, Washington and since her father was in the military she... View Obituary & Service Information

The family of Patricia Sue White created this Life Tributes page to make it easy to share your memories.