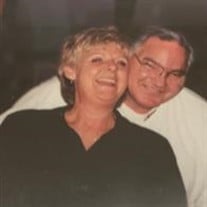 Patsy Ann Young, born February 16, 1946 to James and Opal Spencer in Vera, Ok. Passed on September 7, 2021 in Broken Arrow, OK. She is preceded in heaven by her parents; husband of almost 56 years, Buster Young, her brothers, Jimmy, Roland, Jerry, James, Donald, and Larry. She has left behind, son Troy Young of Lubbock, Texas, daughter Carma and husband Ron Neuss of Broken Arrow, Ok. Grandsons, Hunter Wilson and fiancé Kelsey Arnold of Tulsa, Ok, Travis Young of Owasso, OK, Matthew Young of Aurora, Co. Granddaughter Taylor Neuss of Owasso, OK, Carlye Shannon of OKC, OK. Three siblings Judy Craft, Sharon Wilhite, Ed Spencer. She had many nieces and nephew. So many people came into her and Buster’s lives that they took in and considered their kids. She was the 5th out of 10 children. Being the middle child, she was a strong headed girl. Pat met the love of her life Buster, at The Wheel skating rink in fall of 1961 at the age of 15. They were married June 16, 1962 at the age of 16. They had 2 children Troy, born November 1968, and Carma born July 1970. They were parents that enjoyed their family so much and would do anything for their children. The greatest moment in Pat’s life was when she became a grandma, May 16, 1996, to Hunter Wilson. Her life changed forever. Then again December 20, 1996, to Travis Young. Then again November 20, 2000, to Matthew Young. She got her granddaughter, Taylor Neuss, when her daughter got married, July 2005. They always say you love your kids, then you get grandkids and that changes everything. She loved her grandkids more than anything. The memories they will have. Pat, had many different jobs in her life. Starting as a car hop as a teenager to working in the finance department for Union Public Schools until retirement after 28 years. Retirement did not set well with her. She missed being with kids and being involved, that she went back to working part-time for Union for 4 more years. They also owned Affordable Battery in Broken Arrow. Once she was ready for retirement, her and Buster settled at Grand Lake. This was her happy place. Celebration of Life Service will be 10:00 am, Friday, September 17, 2021 at Floral Haven Funeral Home Chapel. In lieu of flowers donations can be made to the Parkinson's Foundation @ https://www.parkinson.org/ To view the webcasting of the service please use the link below http://webcast.funeralvue.com/events/viewer/60021/hash:92C8678DEAFAEFAE

The family of Patsy Ann Young created this Life Tributes page to make it easy to share your memories.

Send flowers to the Young family.