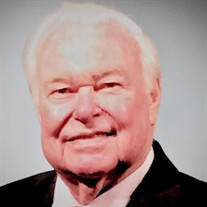 Rev. Paul A. Dennis, 85, of Tulsa, Oklahoma, passed from this life on Thursday, January 28, 2021. He was born September 18, 1935 in Pike Township, Perry County, Ohio to Mary Elizabeth (Whitehead) and Dorsey Virgil Dennis. Rev. Dennis graduated from McLuney High School in 1954. He was inducted into the McLuney Hall of Fame for Outstanding Achievements in 2012. After High School, he enlisted into the United States Air Force, proudly serving his country from 1954-1958. Paul met and married Shirley Mellinger in 1960. To this union was born one daughter, Paula. Rev. Dennis was an ordained minister of The United Pentecostal Church, International, and served in numerous capacities over the course of his life. His first pastorate was Antioch Apostolic Church, Toledo, Ohio from 1973-1976. In 1976, he and his wife received their Foreign Missionary Appointment to the country of Japan. They attended language school as a family and ministered throughout the country, living in Kyoto and Sapporo. In 1979, The Dennis family made a transition from mainland Japan to the island of Okinawa where the First United Pentecostal Church was established for the American Military personnel stationed there. Over the course of 31 years involved in Missions, Rev. Dennis served as Asia Military District Coordinator and Asia Regional Director. The Dennis's travelled extensively across the continent of Asia ministering and making friends. Rev. Dennis retired in 2007, but stayed active in various ministry opportunities across the United States, serving on the Life Tabernacle Board of Directors and Ministry Staff, Tulsa, OK. He also authored two books, Order My Steps and A Promise and A Plan. During retirement he enjoyed being with family, was always faithful to the House of God, kept in contact with many friends and colleagues, enjoyed garage sales and reveled in supplying his great-granddaughters with an endless supply of jelly beans. He is survived by his wife, Shirley of Tulsa, OK. Daughter, Paula Townsley and her husband, Rev. Keith Townsley of Jenks, OK. Grandson, John-Paul Barak Townsley and his wife, Robyne, of Heidelberg, Germany. Great-granddaughters, Olivia Townsley & Mikah Townsley. Sister, Jean Hill, of Raleigh, NC. Sister, Audrey Iles and her husband, Tim Iles, of Reynoldsburg, Ohio. Many nieces, nephews, cousins and extended family members. He was preceded in death by his parents and one brother, Rev. Donald L. Dennis. Paul was eagerly awaiting the arrival of a third great-grandchild – a boy, who will be his namesake: Josiah Paul Townsley. Due to gravity of the circumstances and the result the pandemic has brought into our lives, current conditions have necessitated measures prohibiting a customary farewell. Funeral services will be held in Floral Haven's Rose Chapel with limited seating at 11:00 AM on Wednesday, February 3, 2021 with interment immediately following. For those that wish to watch the service via a live-stream feed, instructions are posted at the bottom of this obituary. In lieu of flowers, the family has requested that a donation be considered to The Paul Dennis Memorial Fund – benefiting UPCI Global Missions – Asia Region. There are two donation options: Mail-in: UPCI, 36 Research Park CT., Weldon Spring, MO 63304 - Reference: Asia Region -2000.2501. Digitally: Text GlobalMissions to 414-44 and follow the prompts thereafter. LIVE STREAM FEED INFORMATION: ***Services will be live streamed starting at 10:55 AM on 2/3/2021. To view the service live, please click on the following link: http://webcast.funeralvue.com/events/viewer/46876 ***Masks are required if you plan to attend the service in person.

The family of Rev. Paul A. Dennis created this Life Tributes page to make it easy to share your memories.

Send flowers to the Dennis family.