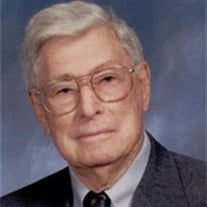 Paul Leo Grace was born on Friday, December 29, 1916 in Ringwood, Oklahoma. He was the youngest of ten children and was educated in Ringwood.Â Â  He spent his early years working on the farm. During World War II, he lived in Tulsa and worked at Spartan Aeronautics where he met Wanda who would later become his wife. He became a highly respected businessman in Tulsa following his departure from Spartan.Â He owned and operated ABC Trucking as well as founded and later retired from Paul Grace Trucking and Grace Sand Company.Â Â  Paul lived a rich life during his retirement.Â He and Wanda traveled all over the United States in their RV, managed to squeeze in a trip to Hawaii, and only missed three states in their travels:Â Alaska, New Hampshire, and Maine.Â They also spent summers in Canada and winters in Old Mexico.Â He was rarely seen without a fishing pole in his hand and owned many boats over the years.Â Paul was an award wining angler.Â On October 26, 1984, at Lake Eufaula, he caught the largest white bass ever caught in Oklahoma which still holds the record today.Â It weighed in at 5 pounds, 4 ounces,Â was 21 inches long with a girth of 15 inches.Â  Â  In his downtime from fishing and traveling, he enjoyed tinkering around the house and visiting with family members.Â He loved to watch westerns and really enjoyed history and museums.Â In his earlier retirement years, he was an avid bowler.Â On most Friday mornings he and Wanda could be found at River Lanes bowling alley. He was a long time member of Glenwood Baptist Church and later Jenks First Baptist Church.Â  Â  Paul was preceded in death by his son Don Grace, as well as his parents, William and Matilda Grace.Â He was also preceded in death by his brothers: Elza, Calvin, Bill, and Oscar; and sisters: Beulah, Ethel, Mabel, Ruth, and Velma.Â  Â  He is survived by his wife Wanda Grace of the home in Tulsa; his daughter: Lucy Murphy of Glenpool, and son: David Grace and wife Vicki of Ketchum.Â Â He is survived by his granddaughters: Vicki Gwartney and husband Tim of Glenpool; Monica Webb and husband Todd of Jenks; Mandy Grace and husband Robin Wagstaff of Pukalani, Hawaii; Melissa Grace-Smith and husband Seth of Tulsa.Â He is also survived by his great grandsons: Brad Gwartney and wife June of Tallahassee, Florida; Chad Gwartney of Tulsa; Zander Wagstaff of Pukalani, Hawaii; and Ryker Smith of Tulsa as well as great grandaughters: Ashley Gwartney of Glenpool; Â Lily Wagstaff of Pukalani, Hawaii; Sadie Smith of Tulsa; and great-great grandaughter Lydia Gwartney of Tallahasse, Florida.Â He is also survived by a great number of family, extended family, and friends. Â  FamilyÂ will receive friends on Monday, January 24, 2011 from 6:00 PM – 8:00 PM at Floral Haven Funeral Home. A celebration of life is Tuesday, January 25, 2011, at 3:00 PM, at Floral Haven Chapel.Â The Reverends Robert Post and Rick Frie will be officiating.Â Honorary pallbearers are: Dewey Gillham, Chad Gwartney, Tim Gwartney, Jerald Lacey, Seth Smith, and Todd Webb. Â  Donations can be made in memory of Paul to Clarehouse or a favorite charity.

Paul Leo Grace was born on Friday, December 29, 1916 in Ringwood, Oklahoma. He was the youngest of ten children and was educated in Ringwood.Â Â  He spent his early years working on the farm. During World War II, he lived in Tulsa and worked... View Obituary & Service Information

The family of Paul L. Grace created this Life Tributes page to make it easy to share your memories.