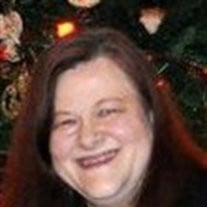 Paula Jean Brubaker, mother of three, grandmother of one, sister, daughter, aunt, niece and cousin died suddenly of natural causes on Tuesday, March 5, 2013. Paula was the firstborn child to Elmer Gene Watkins and Dorma Jean Watkins on October 12, 1960 in Enid, Oklahoma. She graduated from Bixby High School and attended the University of Oklahoma.Paula had many special talents and interests that included music. She was a wonderful singer and conductor. She enjoyed acting, teaching, poetry and writing. Paula was a devout Christian and lived her life that way. She was a member of Victory Christian Church and loved God more than anything in the world. She spent her entire life volunteering in her childrenâ??s schools, her churches and the U.S. Armyâ??s family support groups for those whoâ??s spouses were deployed. She was a choir conductor at several different churches, taught multiple different Sunday School classes and sang and directed for her Sweet Adelineâ??s group in Wiesbaden, Germany.One thing that she may be best known for beyond her God given talent of singing is that she was a wonderful mother and caregiver. To have known Paula was to love her. She devoted her entire life to raising her children and grand-daughter. Her biggest wish was that her children would grow up to love God, accept Jesus Christ as their Savior and to serve him as she did.Paula was survived by two daughterâ??s Cassandra and Marissa Brubaker, one son, Joshua Brubaker, her grand-daughter Anneliese Brubaker, mother Dorma Watkins, brother Gene Watkins, sister Linda VanDyke, three nephews, one niece and several aunts, uncles and cousins. She was proceeded in death by her father Elmer Gene Watkins and grandparents E.T. and RosaLee Watkins and Wilburn and Verna Little. She is with them all in heaven now.

The family of Paula Jean Brubaker created this Life Tributes page to make it easy to share your memories.

Paula Jean Brubaker, mother of three, grandmother of one, sister,...