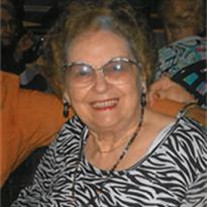 Pauline (Polly) Miller, 89 Former Arkansas resident Pauline L. McCamey Smith Miller, 89 passed away on February 7, 2012 at her home in Tulsa Oklahoma. A memorial service was held in Tulsa, Oklahoma, February 10, 2012 at New Haven Methodist Church. Mrs. Miller was born June 24, 1922 in Harmon, Arkansas to Dewey and Edna McCamey. Polly was the middle child between Ervin and Ralph and enjoyed a busy family life with many cousins nearby. Polly graduated from Springdale High School in Springdale, Arkansas. She married Max Smith in 1941 and welcomed into their lives three children; Joe in 1945, Bob in 1950 and Peggy in 1955. Polly and Max were married over 25 years until his passing in 1966. In 1968, Polly married Troy Miller and embraced his children Glennis Miller and Janet Calvert and their growing families as her own. Troy and Polly were married for over 29 years until his passing. Mrs. Miller worked at Public Service of Oklahoma for 25 years and also was an avid quilter, producingÂ  beautiful , cherished quilts for friends and family. She was also a member of New Haven Methodist Church. Mrs. Miller was preceded in death by her parents, Edna and Dewey (Dude) McCamey, her brothers Ervin and Ralph McCamey, her beloved spouses Max Smith and Troy Miller and her son Joe (Snuffy) Smith. She is survived by her son and daughter-in-law Bob and Debby Smith, her daughter Peggy Birkes of Tulsa, Ok, her daughter-in-law Jacque Smith of King, NC, her grandson and granddaughter-in-law Scott and Jennie Smith, great granddaughters Lauren and Gabriella Smith of Lone Tree, Co; and her step-children Glennis Miller and Janet Calvert of Tulsa, Ok. She is also survived by numerous step-grandchildren and beloved great grandchildren.

The family of Pauline L. Miller created this Life Tributes page to make it easy to share your memories.