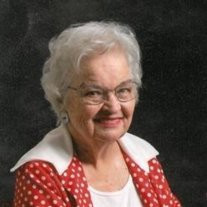 In Loving Memory Pauline P. Kelley March 3, 1920 – October 24, 2013 Pauline was born in Tulsa, Oklahoma on March 3, 1920. A child of the great depression she experienced many hardships in her youth, yet she managed to graduate high school and soon after married the love of her life, James Kelley on March 5, 1940. Together they had two daughters, Sondra and Kathleen. Proud to be a homemaker, Pauline raised her daughters during war time and peace. She and Jim were married 64 years before his death in 2004. In addition to her homemaking responsibilities Pauline was a prolific volunteer, a Brownie and Girl Scout leader, a Gatesway “reader” for the children schooled there and active in her church, the Remnant Church of Jesus Christ of Latter Day Saints, where her husband was an elder. In the 70’s Pauline founded the first free “preschool” program in her community at Jackson Elementary. She taught 4 year olds about colors, shapes, pre reading skills and other fun activities. Her own grandchildren were among the first graduates – a program ahead of her time.’ She loved to swim and was asked to participate in the senior Olympics here in Tulsa. She received Red Cross “Badges” representing many water miles. Her goal was enough miles to cross the United States. She nearly achieved her goal before havin to retire from the sport. She was a wife, mother, grandmother, and great-grandmother. She is survived by her daughters, Sondra & George Highfill and Kathleen & Don Platine and a sister, Rosie Mogseth. She had five grandchildren; Sheri & Eric Unzicker, Janna & Joe Briggs, Russell & Jennifer Caywood and Chance Yeubanks and Morgan Yeubanks. She had six great-grandchildren, Tyler and Kyndall Caywood, Leo Unzicker, Alex Yeubanks, Kelly and Rianna. In lieu of flowers please donate to your favorite charity or The Little Lighthouse and/or Gatesway Foundation. Her family loves her and the world is in a better place for her kindnesses. Services are pending.

In Loving Memory Pauline P. Kelley March 3, 1920 &#8211; October 24, 2013 Pauline was born in Tulsa, Oklahoma on March 3, 1920. A child of the great depression she experienced many hardships in her youth, yet she managed to graduate high school... View Obituary & Service Information

The family of Pauline P Kelley created this Life Tributes page to make it easy to share your memories.