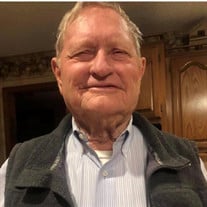 "Philip Roger Gustin, 83, of Tulsa, Oklahoma passed away at St. Francis Hospital on October 28th, 2020 surrounded by his family. Though many knew him as Phil, “Dusty” was his preference after his foreman dubbed him, saying he blew in from Kansas like a dust storm. Born in Virgil, Kansas to Van Gordon and Phyllis Ione (Rogers) Gustin on August 1, 1937, he was raised on a family farm with his 5 siblings. He graduated from Toronto High School in 1955 and immediately set out to make some money. He had a short employment with the railway near Wichita before being hired on at AT&T as a lineman “digging holes and climbing poles.” He was drafted into the United States Army in 1960 and served his country for 2 years. He returned from being stationed in Korea upon his discharge, passing under the Golden Gate Bridge in San Francisco on his 25th birthday. Once back, he re-established his employment with AT&T where he began a long career in the telecommunications industry. While traveling as part of the AT&T construction gang, he met waitress Geraldine “Jerry” Frances Garrick who was working at her family’s diner, Johnny’s Cafe, in North Platte, Nebraska. After a two-month whirlwind romance, they were married on August 1, 1965 in Woodward, Oklahoma. While working on the gang, Dusty lived in 72 different cities and formed lifelong bonds with many of his coworkers. Eventually, he settled in Kansas City, Missouri where he began climbing the corporate ladder instead of towers until his early retirement in 1989 after 33 years. Dusty moved to Tulsa, Oklahoma where he continued his career at Strickland Tower Maintenance before establishing his own company, BJM Consulting, named for his three oldest grandchildren. Later, he established a second company, KJM Properties named for his next three grandchildren, to manage rental houses. When he wasn’t at work, he was outside if possible. He enjoyed gardening, traveling, music and basketball. Each day would find him with a cup of coffee and connecting with people. His favorite way to spend the evening was with a homemade meal followed by listening to old gospel and country songs late into the evening. If you want to know who Dusty was, just walk around his property, talk to his friends, see the devotion of family and you’ll discover his character. He valued relationships and hard work. Everyone can tell you he had a way of making each person feel special, inviting you, one-on-one, to a sports game, music show, or other event. Always in motion, yet never too busy for a good story, a laugh or to lend a hand. With all his connections, when you needed someone, he always knew a guy who could help you out. But often, it was Dusty himself that went out of his way to help. When you saw him, you knew everything would be okay. He spent his time helping neighbors, friends and family through mowing yards, spraying weeds, trimming trees and many secret deeds. Most importantly, Dusty was a believer and a follower of Jesus Christ. His parents set a foundation in the Christian faith and his wife reinforced this. His personal faith grew throughout his life, becoming a dedicated student of the Bible and increasing in devotion to God. He was ready for death and often anticipated the joys of heaven that awaited him. He was joyously reunited to his parents, his brothers Floyd and Jim, his daughter Teresa Lynn and many friends who went before him. Survived by those who will miss him dearly including his wife, Jerry Gustin of Tulsa, OK; daughters Denice (Randy) Gustin-Schneider of Tulsa, Roxann (Dirk) Hertzog of Verdigris, and Kim Gustin of Tulsa, sons Philip R. “Bud” (Glenda) Gustin, Jr. of Bixby and Preston Gustin of Gladstone, MO; beloved granddaughters Brittany (Tom) Winegar, Jordan Gustin, Kaitlyn Gustin, Alix (Max) Cooper and Brittany Lichtenberg; grandsons Jason Schneider, Mathieu Hertzog, Micah Hertzog, Josiah Gustin, Ben Gustin, Dallas Gustin, and Jace Gustin; great-grandchildren Emma, Hunter, Ryanne & Colton Winegar, and Haley & Chloe Cooper; brothers Richard and Roy, sister Jean Schmitt and numerous nieces and nephews that he adored. Viewing will be held at 9:30 a.m. with a celebration of life service following at 10:30 a.m, conducted by Geof Jackson on Thursday, November 5, 2020 at HomeChurch located at 720 W. New Orleans St, Broken Arrow, OK. Graveside services will be conducted by Jay Williams at 1:00 p.m. on Friday, November 6th at the Toronto Cemetery in Toronto KS. Dusty will receive military honors.

"Philip Roger Gustin, 83, of Tulsa, Oklahoma passed away at St. Francis Hospital on October 28th, 2020 surrounded by his family. Though many knew him as Phil, &#8220;Dusty&#8221; was his preference after his foreman dubbed him, saying he blew... View Obituary & Service Information

The family of Philip Roger Gustin created this Life Tributes page to make it easy to share your memories.

&quot;Philip Roger Gustin, 83, of Tulsa, Oklahoma passed away at St....

Send flowers to the Gustin family.