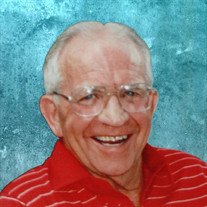 Ralph Leon Walters was born November 1, 1927 and died at age 93 on May 23, 2021 in a nursing home in Irving, Texas. He spent his final years in Stillwater, Oklahoma with his wife Marjorie, until her recent passing. Many family members call him by his middle name "Leon". Ralph graduated from Ripley High School in Ripley, Oklahoma. He was in the same grade with Marjorie Baker, who would become his second wife after he became widowed. He served in the US Navy as a diesel mechanic after the close of World War II, with various stops in Europe. He retired from Amerada Hess Corporation after 38 years in the exploration and production division based out of Tulsa. He started as a roughneck and ended as an operations manager. At one time, he had the record for drilling the deepest wells in both North Dakota and Ohio. His work took him and his family to Seminole, Texas; Lafayette, Louisiana; Brisbane, Australia; Hobbs, New Mexico; Caldwell, Ohio and Charleston, Tioga, Belfield, and Williston, North Dakota, and he also spent a short time working in Prudhoe Bay, Alaska. Ralph was married to Pauline Brown and became a 32nd degree mason in Duncan, Oklahoma. He was always an active and contributing member of a Baptist church, sometimes deacon, in the town where he lived and set an example of Christian morals and values. In different times of his life he enjoyed travel, golf, bowling, hunting, and fishing, especially the Texas Oilman's Bass Invitational, which allowed him to reconnect with old "oil field" buddies. He and Marjorie were active in the Ripley High School alumni association, including class trips and the scholarship committee. He is preceded in death by his parents Lawrence and Myra Walters, his wife Pauline Walters, his wife Marjorie Baker Walters. He is survived by his son Neal Walters, and two sisters Imogene Evans and Shirley McHendry and her husband Ellis, and niece and nephew Sherri Slump (children Melody and Jacob) and Terry McHendry. Funeral services will be held at 12:00 p.m. on Thursday, May 27, 2021 at Crosspointe Church, 1807 N Jardot Rd, Stillwater, OK 74075. Visitation will be held from 10:30 a.m. to 11:45 a.m. just prior to the services.

Ralph Leon Walters was born November 1, 1927 and died at age 93 on May 23, 2021 in a nursing home in Irving, Texas. He spent his final years in Stillwater, Oklahoma with his wife Marjorie, until her recent passing. Many family members call him... View Obituary & Service Information

The family of Ralph "Leon" Walters created this Life Tributes page to make it easy to share your memories.

Send flowers to the Walters family.