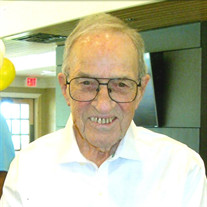 Ramon was born and raised with his brother Paul and sister Nancy in a loving home nurtured by his mother Dorothy in Dubuque, Iowa. He graduated High School and attended Loras College, a private Catholic college in Dubuque, Iowa before being drafted by the United States Army. Ray was deployed in the South Pacific, where he served his country in the Korean War. Following the war, he returned home and married Marilyn in May 1955. Together they raised their six children. He worked for Metropolitan Life Insurance company for thirty years, residing in Iowa, Minnesota, and Oklahoma. He retired as the Vice President of the Trust Department for Liberty Bank in Tulsa, Oklahoma. He enjoyed spending time with his family, playing golf, working outdoors, and traveling. He loved watching and talking sports with his sons. He was an avid fan of Duke basketball and Coach K, the L.A. Dodgers, Oklahoma Sooner football, watching golf, and reveling in the knowledge that Francis Albert Sinatra was the smoothest and most gifted entertainer this world will ever know. Ray was a faithful servant of God, and was actively involved in the Catholic Church where he served in many capacities as a volunteer. He was comforted by the love of his faith, family, and friends for 92 years. He adored his wife, Marilyn, for sixty-six years. He cherished his children and their partners; Steven (Rebecca) McManus, Laura (Paul) Stege, Karen Storey, Robert (Shelley) McManus, Rene (George) Lewellyn and Sean (Delana) McManus; his thirteen grandchildren, and their spouses were a special joy Shannon (Mac) Maddox, Brandon (Paris) McManus, Ryan (Sahar) Storey, Kevin (Lindsey) McManus, Aaron McManus, Christina (Ryan) McIver, Adam Lewellyn,Jeremy Storey, Devon Stege, Bradley Lewellyn, Alexandra McManus, Peter McManus and Aidan McManus; he also took special pride in his ten great-grandchildren and was delighted in hearing that two more were on the way. Words, simply, cannot express the impact Ray had upon the world. His quiet, steadfast demeanor served as a calm reassuring presence to those close to him. He will be deeply missed, yet fondly remembered until we are, once again, reunited in God’s great love. Rosary will be 6:30 pm, Thursday, July 29, 2021 at St. Benedict Catholic Church Funeral Mass will be 10:00 am, Friday, July 30, 2021 at St. Benedict Catholic Church

Ramon was born and raised with his brother Paul and sister Nancy in a loving home nurtured by his mother Dorothy in Dubuque, Iowa. He graduated High School and attended Loras College, a private Catholic college in Dubuque, Iowa before being... View Obituary & Service Information

The family of Ramon Keith McManus created this Life Tributes page to make it easy to share your memories.

Ramon was born and raised with his brother Paul and sister Nancy...

Send flowers to the McManus family.