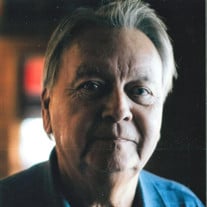 Randolph “Randy” Lee Herrington, age 77, of Broken Arrow, Oklahoma passed from this life on December 4th, 2021. Randy was born on October 7th, 1944 to Lloyd and Mollie Herrington in Pryor, Oklahoma. He graduated high school from Porter, Oklahoma, and earned his Bachelor’s Degree from Northeastern State University. He met the love of his life, Carolyn, and they were married for 55 years and resided in Broken Arrow, Oklahoma. He lost her on August 27th of this year. He was known as “Pastor Randy”. He was the minister at Trinity Baptist Church in Inola before moving on to Owen Park Baptist in Tulsa, where he ministered until his death. Randy also drove a bus for Broken Arrow Public Schools. Randy was known for his love of music. He enjoyed playing the guitar and hacking away at the piano. He was looking forward to driving the tour bus for his grandson, Mason. Randy was in awe of his granddaughter, Brittnee’s, superhuman strength. Ben shared his grandpa’s love for working with his hands. Randy put an antenna on his car so that his grandson, Josh could chase tornadoes. He felt that Liz had a future with the LPGA. He would have done anything for his grandchildren. If you dropped by, you would find him either hitting golf balls at the land or working on his endless riding lawn mowers. He would attempt to send you home with a flashlight or cutter that he bought in surplus at Harbor Freight. Randy was preceded in death by his parents, Lloyd and Mollie Herrington; his wife, Carolyn Sue; and sisters, Linda and Mary. He is survived by his daughters: Rhonda Wells and husband David from Sapulpa and Becky Kiner from Jenks, Oklahoma. Grandchildren: Mason and Brittnee Kiner from Jenks, Ben Wells from Mounds, Joshua and Elizabeth Wells of Sapulpa; Sister, Fran Cox from Tulsa, Oklahoma and numerous nieces and nephews.

The family of Randolph "Randy" Lee Herrington created this Life Tributes page to make it easy to share your memories.

Send flowers to the Herrington family.