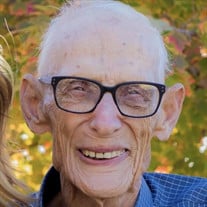 Raymond Leon Appleman, beloved father, grandfather, great-grandfather, and friend passed away on Monday, November 30, 2020. Ray was born March 30, 1930, in Ponca City, Oklahoma, to Stratton and Edna (Howarth) Appleman. At an early age, he moved with his family to Alva, Oklahoma, where he spent his school-age years. He graduated as an Alva Goldbug in 1948. After high school, Ray attended Northwestern State College (Northwestern Oklahoma State University). In 1950, he enlisted in the Oklahoma National Guard and was deployed to Korea with the 45th Infantry Thunderbirds Division (Signal Company – Sgt. (T)2), erecting phone and power lines for troops during the war. Ray returned home in 1952 and enrolled at Oklahoma A&M (Oklahoma State University) where he graduated from the College of Engineering with a degree in Electrical Engineering. Ray soon took a job with Public Service Company of Oklahoma (PSO) where he worked for the next 32 years, retiring in 1988 from his position as Manager, Transmission Engineering. Soon after starting his job at PSO, he met his wife of 60 years, Joyce Ann Vaught. They married on July 21, 1957, in Tulsa, Oklahoma. Together they raised four wonderful children; Mark Appleman, Kent Appleman, Jacki Doak, and Patti Swiderski. Throughout his life, Ray was the original do-it-yourselfer. Repairing anything you put in front of him or building whatever it took to make things work. There wasn’t a friend, neighbor, or family member that didn’t benefit from his knowledge of tools and appliance repair or his willingness to help out where he could, still climbing on roofs well into his 80’s. Since the early 1970’s, Ray was an avid recycler, stripping every broken-down appliance or device for its scrap metal and collecting every aluminum can he saw, letting his children and grandchildren turn it in for cash. Ray loved playing bridge, becoming a Life Master of the American Contract Bridge League in 2005. He was also a proud member of the PSO retiree group The Circuit Riders, where he and Joyce participated in many group activities, including traveling and square dancing. He continued to attend their monthly luncheons until late 2019. He was described by his grandchildren as very hard-working and extremely proud of all of their accomplishments. He loved to tell everyone he met about his grandkids and what they were up to, and he would show their pictures to everyone he could. He was always willing to help them succeed and offered them great encouragement and support. Ray is survived by his brother Ron Appleman, sister Nancy McClure, sons Mark and Kent, daughters Jacki and Patti, daughter-in-law Carrie, sons-in-law Steve and Thad, grandchildren Laura, Chris, Molly, Megan, Tripp, and Karlee, and great-grandchildren Karsyn, Reagan, and Ryan. He was preceded in death by his wife, Joyce, his father and mother, sister Norma Lee Trenfield, and brother James Appleman. In lieu of flowers, please consider a contribution, through Go Fund Me https://www.gofundme.com/f/ray-appleman-memorial-education-fund?utm_source=customer&utm_medium=copy_link&utm_campaign=p_cf+share-flow-1, for the continued education of a dedicated caregiver who went above and beyond for our father and family. A private graveside service will be held Saturday, December 12, 2020 at 10 a.m. and may be available for viewing online. To view the graveside service please follow the following link: https://viewneral.zoom.us/j/96092134511?pwd=SXFsS1BZaXRRNnlieWhLSWIzamoxQT09

The family of Raymond Leon Appleman created this Life Tributes page to make it easy to share your memories.

Send flowers to the Appleman family.