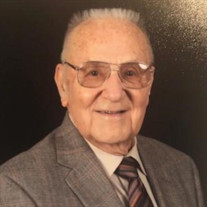 Raymond Henry Heinicke was born in St. Louis, MO, on August 4, 1921, to Gustov and Josephine Heinicke. He passed from this life in Tulsa, OK, on January 19, 2021. He married Mary Belle Lowe on June 7, 1947 and they enjoyed 66 years together and raised two sons. Ray enlisted in the Navy on March 25, 1942. He served active duty in World War II stationed at Pearl Harbor before being honorably discharged on December 4, 1945. While in the Navy, he attained the title of Aviation Chief Machinist’s Mate. After his discharge, he sought to further his aviation education before gaining employment at American Airlines. Ray worked with them until his retirement in 1986. Ray had a passion for woodworking and loved to share his creations with those closest to him. When he wasn’t working in his shop, Ray enjoyed reading, spending time with family and friends, and gardening in his younger days. Ray had a strong faith and found peace attending church and studying his daily devotional. Over the last few years, he developed a love for Wii Bowling with his best friend, Glena and was awarded a trophy for his bowling achievements. Ray had a personality that was engaging and always put a smile on the face of others. He was caring, genuine, loving, hardworking, dedicated, loyal, and faithful. He will forever be missed. Ray is preceded in death by his parents, Gustov and Josephine Heinicke; his wife, Mary Belle Heinicke; a son Raymond Heinicke Jr; a brother Bob Heinicke, and a sister, Dorothy Babcock. He is survived by a son, David and wife Carol, of Bartlesville, OK; a granddaughter, Meghan Brave and fiancé Bobby Brown of Scott, LA; a great grandson, Tristan Brave of Hulbert, OK; a brother Don and wife, Verna of Wenatchee, WA; as well as a host of treasured family and friends. Funeral services will be held at 12:30 pm on Tuesday, January 26, 2021 at Floral Haven Funeral Home Chapel.

Raymond Henry Heinicke was born in St. Louis, MO, on August 4, 1921, to Gustov and Josephine Heinicke. He passed from this life in Tulsa, OK, on January 19, 2021. He married Mary Belle Lowe on June 7, 1947 and they enjoyed 66 years together... View Obituary & Service Information

The family of Raymond Heinicke created this Life Tributes page to make it easy to share your memories.

Send flowers to the Heinicke family.