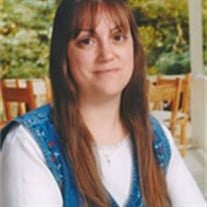 Rebecca Marie (Edwards) Mullins was born April 22, 1963 in Downy, California. She grew up in Northern Idaho and graduated from Post Falls High School in 1982. Shortly after, she moved to Tulsa, OK where she met her husband, Stephen. They were married on August 6, 1983. She is preceded in death by her son, Zachary. She is survived by her husband Stephen Mullins and children, Samuel and Caitlin, of Tulsa; mother Mickey (Whiteley) Goolie of Coeur dâ??Alene, ID; father, Dr. K. Anthony Edwards of NV; sisters Sue Beeson of Perry, KS, Cathy Stafford of Hendersonville, NC, and Tina Wilhelm of Spokane, WA; half-brother, Anthony Edwards; and several nieces, nephews, Aunts and Uncles. The words of Becky Mullins as dictated to and edited by her sister, Cathy Stafford, on February 19, 2012: â??I was married to my husband, Stephen, for 28 years. Although we had hard times, I wouldnâ??t have traded it for anything. The hardest thing I ever had to endure was the death of my son, Zachary; he was only 13 when he died. No parent should ever have to go through that kind of grief. But knowing Samuel and Caitlin needed me kept me going. In December of 2000 (a year and a half after Zachâ??s death) I started working at Mark Twain Elementary School as a teacherâ??s aide, where I stayed in the classroom all day with 4-year-olds. About five years ago, I became a paraprofessional. I loved my job and working with the kids and always thought it was important to keep a sense of humor. During my time at Mark Twain, I had the privilege of working with Mrs. Stepp. I will never forget her friendship and wisdom. Her death impacted me greatly. I had a degree in Human Development and Family Science, but at the time of my illness I was working on getting a teaching degree in Early Childhood Education at Oklahoma State University. Although I still had two years to go, I was considered a senior because of all the credit hours I had earned. I appreciate the wonderful children that I have. Theyâ??ve been such a joy. Iâ??m sorry I got this disease and wasnâ??t able to do the things with Caitlin that I wanted; like taking her to the mall and letting her hang out with her friends. I enjoyed making Caitlinâ??s friends laugh by wearing my goofy hat. Every time I dropped her off or picked her up from a friendâ??s house, they made me wear the goofy cat hat so they could laugh at me. It angers me that I couldnâ??t have spent more time and do more fun things with my children, but I was glad for the time I did get to spend with them. I enjoyed Samuelâ??s goofy sense of humor and was so glad I got to take him to the Weird Al Yankovich show and buy him the CDâ??s for his 20th birthday before I got really sick.â? I loved my Mom and sisters and wish we would have lived closer to each other so we could have spent more time together. I feel honored that God has used me to bring my family closer together.

Rebecca Marie (Edwards) Mullins was born April 22, 1963 in Downy, California. She grew up in Northern Idaho and graduated from Post Falls High School in 1982. Shortly after, she moved to Tulsa, OK where she met her husband, Stephen. They were... View Obituary & Service Information

The family of Rebecca Mullins created this Life Tributes page to make it easy to share your memories.