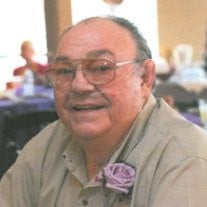 Richard Dotson, 73, of Broken Arrow, died Friday, October 18, 2013. He was born on August 24, 1940, in Tulsa, Oklahoma, the son of Burl and Lela Dotson. On February 24, 1961, he married the love of his life, Mary Carmichael, in Broken Arrow. He was an active member of Bethany Free Will Baptist Church. He is survived by his wife, Mary, of the home, two children, Paul Dotson, and his wife, Denise, of Broken Arrow, and Lea Ann Kaspar, and her husband, Bryon, of Broken Arrow, grandchildren, Kyle Kaspar, Heather Rutherford, Darrell Dotson, Wesli Turner, and Andrea Kaspar, great-grandson, Tristin “Scooter” Kaspar, his classmates of Broken Arrow High School, class of 1959, and numerous other family members and friends. He was preceded in death by his parents, and daughter, Kristi Dotson.

The family of Richard Dotson created this Life Tributes page to make it easy to share your memories.