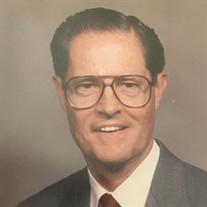 Richard Kenneth Posh, 92, of Tulsa, Oklahoma, passed from this life on Wednesday, June 24, 2020 at the Claremore Veteran’s Center. He was born September 18, 1927 in Kansas City, Missouri to his parents, Kenneth Adam Posh and Annie Louise Oldham Posh. He married the love of his life, Georgia “Elaine” Verser on August 16, 1958 and they have spent over 61 years making wonderful and lasting memories together. Richard always talked of working in the ice cream factory making popsicles after school. He loved the samples and said it was “Cold Work”. In addition to the ice cream factory, he liked the Big Bands and Swing era. He would go to the USO and other big dance halls and ballrooms and would make good money being a busboy and the tips were also good. During high school he was a member of the ROTC. At the age of 18, he entered the United States Navy for 2 years (1945-1947). His main duty while in the Navy was Electrician’s Mate, Third Class, EM3, assigned to the 121st Naval Construction Battalion, The SeaBees, in the United States Navy. He was awarded the Victory Medal World War II. After the military Richard went to college for two years at Kansas University in Lawrence, Kansas where he studied accounting. He then went to work for Skelly Oil Company in 1950, Kansas City, MO. Skelly relocated most of their employees to Tulsa, Oklahoma in 1964. Richard then moved his family to Tulsa. Richard worked as a payroll supervisor for most of his career. He met his lovely wife, Elaine while at Skelly Oil. Richard retired in 1984 from Texaco Oil, which merged with Getty Oil, who acquired Skelly Oil. When he and Elaine retired they moved to the lake. Richard enjoyed tennis and was the Treasurer at Shadow Mountain Tennis Club in Tulsa for many years. He is a “car hound”! He loved cars, cars and more cars. He never missed a car show and would constantly buy and sell cars. All his friends would ask him to find them a good car at a good price. He was always ready to talk cars if he wasn’t watching or playing tennis. Richard is survived by his loving wife, Elaine Posh of Tulsa, Oklahoma; his daughter, Sharlotte Boling and her husband Jan of Tulsa, Oklahoma; his grandson, Shannon Boling and his wife Rose of Sand Springs, Oklahoma; four beautiful great grandchildren, Gabriella, Madison, Georgia and Theodore Boling all of Sand Springs, Oklahoma; and many friends and extended family members. He was preceded in death by his parents, Kenneth Adam Posh and Annie Oldham Posh Littleton. A celebration of life memorial service will be held at 2:00 p.m. on Wednesday, July 1, 2020 at Floral Haven’s Rose Chapel with Pastor Darren Elliott officiating. In lieu of flowers, please make memorials to Charles Trombley Ministries, P. O. Box 140207, Broken Arrow, Oklahoma 74014-0002

Richard Kenneth Posh, 92, of Tulsa, Oklahoma, passed from this life on Wednesday, June 24, 2020 at the Claremore Veteran&#8217;s Center. He was born September 18, 1927 in Kansas City, Missouri to his parents, Kenneth Adam Posh and Annie Louise... View Obituary & Service Information

The family of Richard K. Posh created this Life Tributes page to make it easy to share your memories.

Richard Kenneth Posh, 92, of Tulsa, Oklahoma, passed from this...

Send flowers to the Posh family.