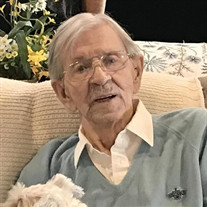 Richard's obituary Richard "Dick" Roberts, 86, of Broken Arrow, OK, passed away peacefully on May 09, 2022, surrounded by family, after a battle with pneumonia. Richard was born on 10/30/1935 to Henry and Lillian Roberts of Highland Park, Illinois. After graduating from Zion Benton High school, he was drafted into the army and was stationed in Korea as an army engineer. He worked as an electrician where he received his journeyman license, then went on to study electrical engineering at Southern Illinois University. After graduation, he accepted his first job as project manager with Hatfield Electric in Chicago, Illinois. In 1959, he met Freida Jackson and they wed in 1961, going on to have 3 daughters; Deanna and Pamela (twins) and Dawn. Richard held many other positions throughout the years and moved into management. He worked as the Vice President of Construction with L.K. Comstock, a construction engineering company, which brought him and his family to Connecticut in 1976. In 1984 he purchased Stewart Electric Company in Tulsa, Oklahoma, at which time the family relocated to Broken Arrow, Oklahoma. He retired in 1997 and spent the next 25 years with his family and friends, and watching any and all sports on television. Richard’s hobbies included skydiving (~1300 jumps) and golfing. He had a great love for cars and watching motor sports, especially drag racing. His pride and joy was restoring his 1977 El Camino. Anyone who knew Richard would describe him as strong willed and caring with a soft heart. He had a unique and subtle sense of humor and loved to get dressed up for Halloween. He was a devoted and loyal friend who loved spending time with friends, co-workers and family. Richard was predeceased by his father Henry, mother Lillian and brother Douglas. He is survived by his brother Donald (Mary) Roberts, wife Freida, of 61 years, daughters Deanna (Jesse) Saldivar, Pamela (Brett) Woodward, and Dawn (Tony) Tarin; grandchildren Paige Sackett, Craig (Abby) Sackett, Collin (Jaycee) Woodward, Breanna Woodward, Jakob Tarin, Taylor Woodward, Maddie Sackett, Brody Tarin, Lance Saldivar, Natalee Saldivar, Braxton Saldivar and Sadie his grand-dog; great grandchildren are Payson Wycliffe, Landon Ashley and Nakota Saldivar. The family requests that all flowers and notes are sent to Northside Christian Church in Broken Arrow, Oklahoma. There will be a celebration of life on Friday, May 13, 2022 at 12:30 pm at Northside Christian Church in Broken Arrow.

Richard's obituary Richard "Dick" Roberts, 86, of Broken Arrow, OK, passed away peacefully on May 09, 2022, surrounded by family, after a battle with pneumonia. Richard was born on 10/30/1935 to Henry and Lillian Roberts of Highland Park,... View Obituary & Service Information

The family of Richard Narva Roberts created this Life Tributes page to make it easy to share your memories.

Send flowers to the Roberts family.