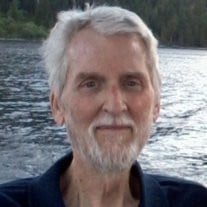 Richard Nelson Rogers, Jr., 69, of Tulsa, died Monday, November 4, 2013. He was born on January 7, 1944 at Pryor, Oklahoma, the son of Richard and Edris Rogers, Sr. On February 19, 1977, he married Deborah Lee Denzler, in Tulsa. He served in the United States Marines, having been honorably discharged in 1970. Richard is survived by his wife, Debbie, of Tulsa, son, Adam Rogers, and his wife, Miranda, of Houston, TX, daughter, Tianna Rogers, and her fiancÃ©, Jesse Garcia, Jr., of Tulsa, mother, Edris Rogers, of Tulsa, brother, Mark Rogers, and his wife, Marsha, of Tulsa, sisters, Linda Gilliland, and her husband, Jerry, of Sperry, and Carol Mann, of Waco, TX, and numerous other family members and friends. He was preceded in death by his father. Memorial contributions may be made to Clare House 7617 S. Mingo Road, Tulsa, Oklahoma 74133.

The family of Richard Rogers, Jr. created this Life Tributes page to make it easy to share your memories.