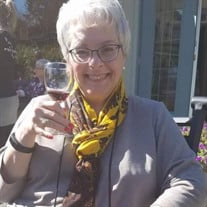 Rita "Gail" Cornejo, 70, passed from this life into the life and care of Jesus Christ on Sunday, December 12, 2021. Gail was born October 22, 1951, to Clarence and Donna (Foreman) Hill in Shawnee, Oklahoma. Through the years her father was transferred around the oilfields until they moved to Casper, Wyoming. Gail was the oldest of five girls. She graduated from Natrona County High School in 1969. After graduation, the family moved to Houston, Texas where Gail started working for Southwestern Bell. She decided to do some moonlighting as an usher (Spacette) at the Astrodome. It was there that she met a coworker, Joseph (Joe) Cornejo, the love of her life. Gail and Joe were married on July 27, 1974, in Houston. In 1979, Joe's work led them to Tulsa, Oklahoma and they settled into their home in Broken Arrow. There they became one of the founding members of the Church of Saint Benedict. Gail and Joe were separated in this world on their 22nd wedding anniversary in 1996. Gail stayed in Broken Arrow until her work transferred her to Chicago in 2010. She bought a house in Kenosha, Wisconsin, and became a devout Green Bay Packers fan. In 2019, she retired and was able to "move back home" to Broken Arrow and to her friends and church family. Gail was preceded in death by her beloved husband, her parents, and one sister, Gaye Hill Kirby. She is survived by her sisters Gwyn Hill of Midland, Texas, Gina Ponder (Roy) of San Angelo, Texas, and Gerri Hill of Midland, Texas. Also cherishing her memory are her "son" Jeff Cornejo of Rosenburg, Texas; nieces and nephews LaDonna Seale (Camron), Matthew Wallis (Joanie), Julie Hamil (Reed), Greg Ponder, and Kayla Ponder. She is also survived by her uncles Ron Foreman (Patsy) and Larry Foreman (Joan). Gail also leaves behind members of the Cornejo family, work friends, and her church family. Visitation will be held on Monday, December 20 from 4p - 6p at Floral Haven Funeral Home, with a rosary at 5:30 pm. Funeral Services will take place at 10 am on Tuesday, December 21 at St. Benedict Catholic Church- 2200 W Ithica St, Broken Arrow, OK 74012 with graveside services to follow. Memorials can be made to the church of Saint Benedict or a charity of your choice.

Rita "Gail" Cornejo, 70, passed from this life into the life and care of Jesus Christ on Sunday, December 12, 2021. Gail was born October 22, 1951, to Clarence and Donna (Foreman) Hill in Shawnee, Oklahoma. Through the years her father was transferred... View Obituary & Service Information

The family of Gail Cornejo created this Life Tributes page to make it easy to share your memories.

Rita &quot;Gail&quot; Cornejo, 70, passed from this life into the life...

Send flowers to the Cornejo family.