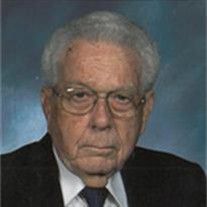 Robert Wilson â??Bobâ? Booth, 95, died Monday, October 1, 2012 in Tulsa, Oklahoma. He was born October 15, 1917 to Horatio and Bessie Belle VanCleave Booth in the sod house built by his father on land heâ??d homesteaded in Brown Valley south of Callaway, Nebraska. He was the youngest of five children. Bob attended the one-room Brown Valley School for eight years, then completed his education and graduated from Callaway High School in 1935.His youth was typical of farm boys of the era, and was spent playing, hunting, trapping, training his dogs and working on the family farm. As a teenager he was captivated by airplanes and flying, often racing his horse to the top of the nearest hill for a better view when an occasional plane flew over. While still a teenager he taught himself to fly in an OX5 Robin aircraft that belonged to a friend. Bob was a true aviation pioneer whose lifetime spanned the days of the â??barnstormersâ? to modern jet aircraft.Bob and Maxine Lucille Roberson, from Oconto, Nebraska were united in marriage on December 6, 1939. Two children were born to this union: Robert Wayne in 1943 and Nancy Jean in 1947. Mr. and Mrs. Booth celebrated their 72nd Wedding Anniversary in December, 2011. He was a member of Sandusky Avenue Christian Church in Tulsa.Â In 1939 Bob entered the aviation industry working for Continental Airlines as an aircraft mechanic. This employment led to he and Mrs. Booth to Wichita and Denver before locating permanently in Tulsa, Oklahoma, where he resided until his death. During WWII he earned his Airframe & Engine license. Following his employment with Continental he worked for several oil companies in the 1940â??s during the pioneer days of corporate aviation. He joined Helmerich and Payne, Inc in Tulsa in 1952 as Chief of Aircraft Maintenance. Later he was named Director of Aviation, serving until his retirement in 1982. In the course of this employment several models of aircraft in his charge collectively logged over 4,300,000 miles without an accident or incident. In 1980 he was honored by the Federal Aviation Administration as Aviation Maintenance Technician of the year.Following his retirement the Boothsâ?? traveled throughout the United States in their motor home. They purchased a home in Mesa, Arizona which became their winter headquarters for fifteen years. Bob was blessed with many talents. He was a true craftsman with an artistic bent, and created many beautiful metal sculptures. Probably his best known sculpture is a globe several feet in diameter built entirely from horse shoe nails, fitted with a detailed map of the world and finished in molten brass. It was designed and crafted especially for AAA of Oklahoma, and is exhibited at their headquarters on East 15th Street in Tulsa.Bob was preceded in death by his parents, a brother Cecil, and three sisters: Genevieve Maller, Nita Brohman and Harriet Krack. He is survived by his wife Maxine of the home, and his children and their spouses Wayne Booth and Gail, Tulsa, Oklahoma and Nancy Lents and Jim, Indiahoma, Oklahoma. He is also survived by five grandsons and their spouses: Derek Booth and Michele, Claremore, Oklahoma, Fletcher Booth, Salt Lake City, Utah, Clay Lents and Angela, Aurora, Nebraska, Dustin Booth and Michele, Ft Lauderdale, Florida and Ross Lents and Beth, Edmond, Oklahoma. Other survivors include great grandchildren Skye Booth, Nolan Booth, Lucas Booth, Austin Lents and Tajel Elizabeth Lents. He is also survived by several nieces and nephews, grand-nieces and grand nephews and many friends.

The family of Robert W. Booth created this Life Tributes page to make it easy to share your memories.