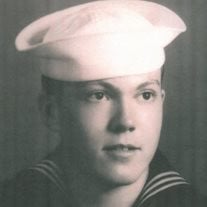 Robert M. “Bob” Buckles, 78, of Tulsa, died on Thursday, January 16, 2014. He was born in Nelagoney, Oklahoma on August 14, 1935, the son of William and Myrtle Buckles.Robert Marion Buckles was a good man–a noble observer of the honor codes of the U.S. Navy and all those western novels he read. He was a good ol’ boy with humble origins in the tiny town of Neloganey and lasting posthumous roots in East Tulsa. He was a good Samaritan to a number of friends, strangers, and stray animals. To his family, he was as good as the gold tooth he flashed in the throes of his gruff laughter, and to the universe, he was a good egg by every definition—but good golly! he was a GREAT Bob.Bob was a tattooed fellow with a gravelly voice and a gun collection. He put up a good front to those who should be minding their own business. However, to those he loved, he had the GREATEST capacity for patience and compassion. Sure, his good-natured ornery streak prompted him to treat everyone to some good grief from time to time, but we’re certain St. Peter will give him time off for the good behavior he demonstrated: He was a loyal companion, a gentle coach, a sentimental dreamer, and a tolerant jungle gym. He answered to “Baaaaaaaaaaaahbb!” “Daddy,” and “Papa,” but, in the wisdom she surely inherited from him, his GREAT-granddaughter, Edi Arneecher promoted him to “GREAT Bob” before she could say much else. Her brother A.J upheld the title a few years later when he uttered his first word: “Bob.”In Bob’s opinion, good things (like his grandbabies) came in small (and not-so-small) packages. We lost count of the assorted books, kits, tools, and toys he stashed away in his work bench, closets, cabinets, shelves, and shed. By all accounts, he had a good command of hobbyish tinkering. He delighted in his vintage cars, wire bonzai trees, wooden models, leather stamps, ships in bottles, geneaology charts, calligraphy samples, and watercolors. He also had good instincts for fashioning odd parts for home repairs; things we thought were useless became good as new once he fiddled with them. However, his careers as an iron sculptor and a paint and body specialist are testaments to the fact that Bob had a GREAT aptitude: He was truly an artist. Though he was highly under-celebrated (especially in his art teacher grandson-in-law Brian Arneecher’s opinion). Bob had a creative nature and profound talents in a number of impressive dimensions. He had a good eye for design (but you’d have to speak into his good ear to congratulate him.)Bob invariably had two good ears and a whole good head on his shoulders when it came to football, though—either that, or he had good luck! He seemed always to know who would win. He also seemed to shamelessly switch sides when the wind shifted EXCEPT for when his teams were playing. Then he was fiercely faithful. He was a good OU Sooner supporter, but he was a GREAT Dallas Cowboy fan. He knew that watching the games with his son Rob Buckles, his grandsons Clay and Travis Buckles, his son-in-law Uel Edwards, and his brother-in-law Ted Zerbey would establish an enduring dialogue and a manly affection for all seasons…And speaking of sports, he was a good one! Ask anyone on the Edwards side of his extended family who played on his impulses to open the largest box in a rousing game of White Elephant. Somewhere he is lounging in a recliner, sipping Diet Pepsi, and having the last raspy chuckle about the GREAT green snake debacle.He loved his Diet Pepsi… but he loved food more! When it came to sharing a meal, Bob heartily thwarted the notion of “too much of a good thing.” Moderation was a sin in his opinion. All dishes were good, and he planned to have seconds. Eating was competitive, and quitting was for wimps. He insisted on having the first and largest helping. Also, it was rude not to express some desire to lick the plate. And whatever his daughter Dianne Edwards, his daughter-in-law Maggie Buckles or his sister-in-law Violet Coppenger served was his new favorite thing.He could never choose between casseroles, salads, and pies, but he was good at taking sides in arguments. After a few heated debates over the years, his grandchildren, Brian Edwards and Joy Arneecher came to appreciate the fact that he was winking and signaling behind all our backs, playing the good cop at every angle. This is why we loved him. He was the GREAT peacekeeper and the gentle balance in an ever-growing family of opinionated personalities. Even his newest GREAT-grandson, Dylan Wade could tell you that Bob’s habitual reminder in parting was to “be good.” That is all he hoped we would be.…But good isn’t good enough as we say goodbye to our patriarch. It’s only fitting that we say GREAT bye, Great Bob. Put in a good word for us up there. You’ll be in good company with your wife Betty, your brothers Orville and Albert Buckles, your sister Pearl Bunch, and your brothers-in law Tom Zerbey and Bill Coppenger, and your sister-in-law Vivi Zerbey. We know you’re leaving on good terms, and your guess is as good as ours when we’ll meet again. In the meantime, we’ll cherish our GREAT memories of you.

The family of Robert “Bob” Buckles created this Life Tributes page to make it easy to share your memories.