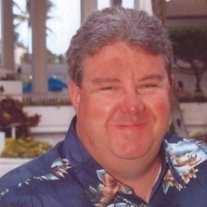 Robert Frank Elmore Jr., 48, of Coweta, Oklahoma passed away peacefully on December 12, 2013 in Tulsa, Oklahoma after a courageous battle with cancer. Born on September 26, 1965 in Anchorage, Alaska to Betty Glover and Robert F. Elmore Sr., stationed at Elmendorf Air Force base. His father was transferred to Nellis Air Force base in Las Vegas, NV two years later. Bob graduated from Indian Springs High School in 1983, where he met the love of his life, Diana, his wife of 24 years. In 1989, he graduated from the University of Nevada, Las Vegas with a Bachelor of Science degree in finance. Bob and Diana married after graduating from college and have two children, Jessica and Steven. Bob moved his family to Tulsa, OK in 2003 and settled in Broken Arrow, when he was transferred by Wells Fargo Financial. Since 2010, Bob has worked as the Indirect Lending Supervisor at Tulsa Teachers Credit Union.Bob enjoyed sports, golfing, fishing, boating, traveling and laughing with friends and family. He especially enjoyed taking his boat out on Fort Gibson Lake.He is survived by his wife, Diana C.; son, Steven R. both of Coweta, OK. Daughter, Jessica R. of Las Vegas NV. Stepfather, Elmer ”Buss” Glover; sister, Paula Carson; niece, Sarah O’Donnell, all of Ely, NV. In-laws Dr. Joseph and Judy McCullough; sister-in-law, Victoria Webb, all of Las Vegas, NV, along with countless friends. He was preceded in death by his parents, Betty Glover and Robert F Elmore Sr., and nephew Colin O’Donnell.Bob touched the lives of many people with his smile and generosity, and maintained his trademark sense of humor right to the end. Friends and family are invited to attend a rosary service on Monday, December 16, 2013 at 7 pm and funeral services on Tuesday, December 17, 2013 at 11:00 AM both at St. Anne’s Catholic Church, Broken Arrow, OK. Floral Haven Funeral Home, Broken Arrow, is handling the arrangements. In lieu of flowers, the family requests all donations to be sent to the wonderful people at Clarehouse at Clarehouse.org in Tulsa, OK on his behalf.

The family of Robert Frank Elmore, Jr. created this Life Tributes page to make it easy to share your memories.