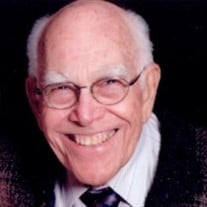 OBITUARYDr. Robert Kendall Endres, 97 years young, of Tulsa, Oklahoma, passed away peacefully with family present on December 12, 2020. Robert was born in Madison, Wisconsin to Otto John Endres and Helen Beatrice (Schlatter) Endres. He grew up in Tulsa and graduated from Central High School in 1941. Growing up, he spent his summers at Camp Chippewa, a camp his father founded in Minnesota. He played a big role in the development of that camp, which in turn played a big role in developing his character, and the character of hundreds of other boys.He attended college at La Crosse State Teachers College in La Crosse, Wisconsin. Before graduating, he enlisted in the army for World War II. The army needed medics badly, and he wished to become a physician, so the army sent him to Cornell University to complete several courses before he could enter medical school. The war ended before Robert got his M.D. degree at the University of Oklahoma School of Medicine. While he was studying at O.U., he met Esther Haworth and they were married on August 30, 1946.Robert worked as a general practitioner for two years in Sallisaw, Oklahoma and then re-enlisted in the army to serve in the Korean War, where he gave free medical assistance at a nearby orphanage and gained a love of treating children. Upon returning from Korea, he completed a residency in pediatrics at the St. Louis Children's Hospital from 1953 to 1956 and started his career as a pediatrician in Tulsa, Oklahoma.He played a prominent role in Tulsa’s first mass polio immunization campaign in 1963. He developed a diabetes treatment and education program that led to the start of both a summer camp and a winter skiing camp for children with diabetes. Dr. Endres served on the board of directors of St. Francis Hospital from 1967 to 1987 and he was a clinical professor at the University of Oklahoma Health Science Center in Tulsa from 1999 to 2003. He also served as camp doctor for many years at Camp Chippewa.He was preceded in passing by his parents Otto and Helen, his wife Esther, his brother Richard, and his sister Miriam. He is survived by his brother John Paul Endres and his sister Helen Elise Endres, five children, five grandchildren, and three great-grandchildren. Children (with spouses) are: Robert Otto and Rebecca Endres, Susan (Endres) Sossamon, Lynn Dee Endres, John Howard Endres, Lisa Ann (Endres) and Keith Loos. Grandchildren (with spouses) are: Eric and Amanda Sossamon, Heather Sossamon, Sarah Endres, Adam Loos, Matt and Lauren Loos. Great-grandchildren are: Emme and Mollie Sossamon and Hudson Loos.Due to Covid-19 pandemic concerns, no public services will be held. Immediate family will attend a private interment service at Floral Haven Funeral Home, Broken Arrow, Oklahoma.

The family of Bob Endres created this Life Tributes page to make it easy to share your memories.

Send flowers to the Endres family.