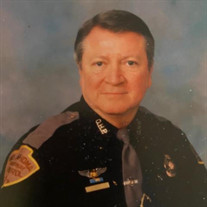 Robert Lee Oard, resident of Tulsa, Oklahoma, passed away at home on Saturday, April 9, 2022 at the age of 81.Robert “Bob”, the son of the late Robert Burton Oard and Elsa Lee Thacker Oard was born on January 7, 1941 in Barnsdall, Oklahoma. He attended Barnsdall Public Schools where he lettered in Basketball and Football, graduating with the class of 1959. The same month Bob enlisted in the Army, completing his basic training at Fort Jackson, S.C. After satisfying his military commitment, he accepted a position as a State Trooper with the Oklahoma Highway Patrol, graduating with the 20thO.H.P. Academy training class. He served the Great State of Oklahoma, as a Trooper and Pilot for 31 years, before retiring on January 31,1997.Bob is preceded in death by his parents Robert and Elsa Oard previously of Barnsdall, Oklahoma; wife Nancy Dalton Oard of Tulsa, Oklahoma; and son Robert A. Oard of Owasso, Oklahoma. He is survived by his first wife Wonda Oard of Owasso, Oklahoma; son Terry Oard, daughter-in-law Jennifer Oard, grand-children Samantha Oard and Zachary Oard and great-grandson Elliott Oard, all of Tulsa.

The family of Robert Lee Oard created this Life Tributes page to make it easy to share your memories.

Robert Lee Oard, resident of Tulsa, Oklahoma, passed away at...

Send flowers to the Oard family.