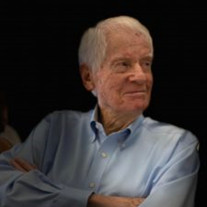 On December 17, 2019 Robert Blaine (Bob) Spears, age 93, passed away peacefully at home, surrounded by his children, after a long struggle with complications from congestive heart failure.Bob Spears was the son of Blaine and Piety (Griffin) Spears. He was born and grew up in Appleton, AR where his father worked as a rural mail carrier for almost 30 years. Bob enlisted in the Army Air Corps in 1944 after finishing high school; after the war he attended Oklahoma A&M on the GI Bill and graduated in 1948 with a degree in statistics. He first went to work for Oklahoma A&M before attending graduate school at Iowa State University. After a time back in Stillwater working for Oklahoma A&M Bob went to work in Tulsa as a market research analyst for Leslie Brooks and Associates.He married Jean Mayer in September 1953 and lived the rest of his life in Tulsa where he and Jean raised four children. Bob started his own market research company, Spears and Associates, in 1965, primarily working for oilfield equipment and service firms. He first tried retiring in 1994, then re-retired in1996 and finally retired one last time in 1999.Once he retired, Bob became actively involved with the Downtown Rotary Club of Tulsa and the Salvation Army. Bob and Jean had a special dedication to the Rotary program at Celia Clinton Elementary School where they mentored children in reading and arithmetic. As a result of this work, Bob and Jean were named Tulsa Public Schools’ Senior Volunteers of the Year in 2003, an honor that they both greatly appreciated. After Jean passed away in 2004 Bob married another wonderful lady, Beverly Calvert.Bob was preceded in death by both Jean and Beverly and a sister, Louise.He is survived by his other sister, Ruth, as well as two sons – John and his wife, Ronda, and Richard and his wife, Carol – two daughters, Martha Rusco and her husband, Greg, and Mary Spears (all of Tulsa) – two bonus daughters – Cindy and Vicki – and their families – along with 10 grandchildren – Erica Joosten (Adam), Reid Spears (Susan), Daniel Rusco, Charles Spears (Lauren), Claire Spears (Brady Ballew), William Spears, Robert Rusco (Sally), Laura Quinn (Hunter), Emma Spears and Suzanna Heldenbrand (Derrick) – and seven great-grandchildren – Ford, Grant and Van Joosten; Penny, Eddie and Linus Rusco; and Anthony Spears. In addition to raising their four kids, Bob and Jean took in a foster child – Lisa, an infant – for about a year; later they hosted high school students from around the world in their home as part of a full-year student exchange program through AFS (American Field Service); Bob was also “Dad” to Christoph from Germany, Brigit from Switzerland, and Tomoko from Japan. All were part of his family.Bob is also survived by nieces, nephews, cousins and many friends – each of whom meant so very much to him.A funeral service will be held at 1:00 PM Saturday, December 21, 2019 at Asbury United Methodist Church Mason Chapel, 6767 S Mingo Road, Tulsa, OK, with a reception to follow. Floral Haven is providing funeral arrangements. In lieu of flowers, donations may be made to any of the organizations whose work was very important to Bob: The Salvation Army Adult Rehabilitation Center (salarmytulsa.org/arc/), The Bill Shaffer Foundation (c/o J. Baumgartner, 8722 S. Louisville Ave., Tulsa, OK 74137), or Asbury United Methodist Church (asburytulsa.org)

On December 17, 2019 Robert Blaine (Bob) Spears, age 93, passed away peacefully at home, surrounded by his children, after a long struggle with complications from congestive heart failure.Bob Spears was the son of Blaine and Piety (Griffin)... View Obituary & Service Information

The family of Robert Spears created this Life Tributes page to make it easy to share your memories.