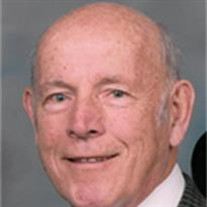 WEDLAKE – Robert Thomas Sr, age 87 years, entered eternal life Tuesday, March 27, 2012 at The Homestead in Owasso, OK. He was born March 24, 1925 in Chicago, IL to Lee A. Wedlake and Adele Pratt. A WWII Navy Sailor, Bob served on the SS Yankee Sward, SS Andrew Carnegie, SS Joseph Priestly and the SS Makua. During the 3 years 10 1/2 months he served, he received the American Area Ribbon, European-African-M.E. Area Ribbon, Asiatic-Pacific Area Ribbon, and World War II Victory Ribbon, with his final rank being Gunnerâ??s Mate Third Class. After his honorable discharge in March of 1946, he returned home to Chicago, where he met and fell in love with Virginia Rose Vaughn. They were married on April 19, 1947 and were blessed with their first child, Robert Thomas Wedlake, Jr., on August 15, 1955. Six weeks after the birth of their second son, Brian Patrick Wedlake, they transferred for Bobâ??s employment with Midwestern Instruments-Memorex/Telex to Tulsa where they made their home. Bob retired as Production Manager from Memorex/Telex in January of 1991 after 43 years of service, with plans to travel with his wife. Their first trip was to Las Vegas, where Virginia suffered a massive heart attack and stroke. With Bobâ??s never ending love and encouragement, and her strength of will and determination, she overcame many obstacles and was able to resume an active life. Bob and she enjoyed several more trips, and many activities with their children, grandchildren and great-grandchildren. And in 2001, Bob received his High School Diploma in special Commencement Exercises presented by Tulsa Public Schools for World War II Veterans. Having never graduated high school due to enlisting in the Navy, this was a special honor for Bob, and a wonderful memory for his family. Suffering from Parkinsonâ??s disease and related dementia, Bob eventually struggled physically and to communicate verbally, but never lost his wonderful smile or the ability to let you know how much he loved you through the look in his eyes. In his last year and half, he was lovingly cared for by the wonderful staff at The Homestead, and his family was able to be with him as the Lord and Virginia called him home. Preceded in death by his mother and father; his wife; 4 brothers; 1 sister; and grandson, Jay Thomas Wedlake. Survived by his sons, Robert Wedlake, Jr and wife Gina of Tulsa, OK and Brian Wedlake, Sr and wife Melissa of Skiatook, OK; grandchildren Brian Wedlake, Jr and wife, Lindsey, Angela Foster and husband Danny, John Wedlake and wife Jamie, Caroline Murray and husband Mike, Cara Nichols and husband James, Austin McDonald and wife Mary, Tessa Alumbaugh and husband Grant; 10 great-grandchildren; and relatives and friends too numerous to name. A Funeral service will be held 12:30 pm on Monday, April 2, 2012 at Floral Haven Chapel in Broken Arrow. Memorial contributions may be made to The Jay Wedlake Memorial Scholarship, c/o Exchange Bank, 111 N Highway 11, Sperry, OK 74073.

The family of Robert T. Wedlake, Sr. created this Life Tributes page to make it easy to share your memories.