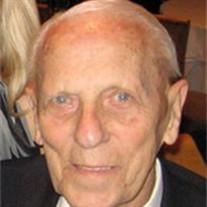 Roelof A. Buitink Roelof passed peacefully into Godâ??s care on Thursday morning, May 24, 2012. He was 86. Known to all as â??Rudyâ?, he was born November 1,1925 in Tulsa, Oklahoma to naturalized American citizens, Cornelis Jacobus Buitink and Christina Catharina Mulder originally of the Netherlands (Holland). He was preceded in death by both parents and a sister Jane Langewerff of Virgina. He is survived by his wife of 60 years, Janneke â??Ankieâ? W. Buitink, Three children, Adrian Buitink of Skiatook, Madeleine Johnson, of Highlandâ??s Ranch, Colorado and Janneke Haverkamp of Owasso. Two Son in laws, Rex Johnson, David Haverkamp and one daughter in law, Susan Buitink. He is survived by 8 grandchildren. Natalie, Nickolas and Marijke Buitink, Savannah, Zachary, and Andrew Johnson, Christopher and Chase Haverkamp and countless others he considered â??family.â? Rudy was quick with a smile and an opinion. Hopefully yours matched his! A man of strong wills, he withstood many adversities in life. While living overseas as a teenager with his parents in Holland, Rudy and his family were rounded up as American citizens by the German SS and placed in a concentration camp named Armersfoort. Though placed with Jewish persons and captured Russian soldiers, many of whom are still buried there, his family survived and eventually towards the end of the war were released. Rudy volunteered with the International Red Cross after his familyâ??s release so that he could carry out his assistance to the Dutch underground Resistance Fighters in rescuing Allied flyer. With his papers as a Red Cross personnel, he could be out after curfew. On the day that WWII ended Rudy was hiding with an unnamed American pilot in a wine cellar where they heard the news over a â??crystalâ? radio that he had working in a wooden cigar box. Needless to say a couple of bottles went missingâ?¦. Once again, facing adversity, against the well wishes of her father, Rudy married Ankie in Stillwater, Oklahoma on June 30, 1950 where she had traveled to come to be with him and also enroll at the former Oklahoma Agricultural and Mechanical College, now Oklahoma State University. Arriving with limited English language after growing up overseas, he completed his degree with a Bachelor of Science in Commerce. Hence was the start of Rudyâ??s plan that all of their children would attend and graduate from OSU and not that other placeâ?¦.and he succeeded. Rudy and Ankie continued and continue as OSU fans. He was US Army and also served in the Oklahoma National for a short period of time. After returning to the work force he was employed as a Sales Engineer with Pacific Pumps, a division of Dresser Industries in Tulsa from 1957 until his retirement in 1990. He was actively involved in The Tulsa Figure Skating Club, serving as President and as a Director and Officer for many years, developing just one more chain of life-long friendships. During this time he assisted and mentored many. He also would speak publicly about his love of America and the freedoms of which so many take for granted. Several years ago he was asked to do an interview with Joe Dodd of Bartlesville, Oklahoma who was enlisting the stories former WWII participants and heard of Rudyâ??s story. He contributed his account of the prison camp and it is now on permanent file at the Eisenhower Library along with thousands of other veteranâ??s stories. There are DVD copies of this available from his son Adrian. Additionally after discovering â??the internetâ? in his 70â??s, and discovering a website about the former prision camp, he contacted an author about their research of Kamp Amersfort and was asked to contribute a chapter about Americans interned there in Holland as the Germanâ??s destroyed all records and there was no knowledge of anyÂ American citizens interned there. In retirement and life he enjoyed camping, fishing and hunting. The family has requested in lieu of flowers, a donation in his name be made to The OSU Foundation.

Roelof A. Buitink Roelof passed peacefully into Godâ??s care on Thursday morning, May 24, 2012. He was 86. Known to all as â??Rudyâ?, he was born November 1,1925 in Tulsa, Oklahoma to naturalized American citizens, Cornelis Jacobus Buitink... View Obituary & Service Information

The family of Roelof Adriaan Buitink created this Life Tributes page to make it easy to share your memories.