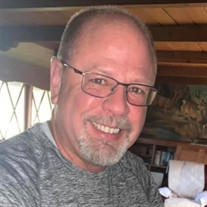 “RP”, Roger Paul Schuering, aged 59, passed into his eternal home on October 18, 2021, at 3:55 pm in Kingwood, Texas after a courageous battle due to COVID complications. He was a member of St.Philip the Apostle Catholic Church in Huffman, TX. He was born in Odessa Texas, on September 18, 1962, to Roger Clement Schuering and Virginia Gloria Lehmann Schuering, and his four sisters who all delighted at the birth of a boy. He was preceded in death by his father Roger Clement Schuering and his eldest son, Evan Paul Schuering. He is survived by his mother, Virginia Schuering from Tulsa, Okla; his son & daughter-in-law, Grayson and Melinda Schuering, his grandsons Lucas Gray and coming in January Milo Lee from Checotah Oklahoma; his daughter Madeleine Schuering from Spring, Texas, and his son Christian Schuering from The Woodlands, Texas; his sisters and brothers-in-law, Vienna Schuering and Rod Kendrick, Broken Arrow Okla; Sylvia and Zanny Sloan, Sand Springs Okla; Emilee & Albert Unger, Enid Okla, and Lorraine & Dale Seawright, Nevada Tx, and many nieces and nephews. Roger is also survived by his girlfriend, Ann Pilkington, who was completely devoted to him every minute of his illness. Roger graduated from Edison High School in Tulsa Oklahoma, in 1981. After graduation, Roger served his country in the US Marine Corps. He earned his BS in Mechanical Engineering from the University of Tulsa in June 1989. He began his career with Chevron Phillips in July 1989 in Borger Tx as a mechanical design engineer. In 1998, he went to work for Phillips Pasadena Chemical Complex as a Project Engineering Supervisor until 2004. He joined Texas Petrochemicals from September 2004 until 2007. Roger finished his prestigious career working for LyondellBasell (LYB) beginning in September 2007. Roger wore many hats over the years working for LYB as the Construction Manager for the following projects: LYB Alliance, Olefins Expansion, CorpusChristi Debottleneck Project, LYB Hyperzone Project, and lastly LYB Bayport PO/TBA (the world’s largest PO/TBA project). This last project was the highlight of his career as he was responsible for 900 employees and ensuring a safely built project. Roger was a wonderful colleague and friend to all that had the good fortune to work with him. He was dearly loved by his coworkers, and his family due to his humility, sense of humor, generosity, sincerity, and kindness. Visitation will be 4-6 pm, Monday, October 25, 2021 at Floral Haven Funeral Home Chapel. Rosary will be 6:00 pm, Monday, October 25, 2021 at Floral Haven Funeral Home Chapel. Funeral Mass will be 1:00 pm, Tuesday, October 26, 2021 at Most Precius Blood Parish in Tulsa.

&#8220;RP&#8221;, Roger Paul Schuering, aged 59, passed into his eternal home on October 18, 2021, at 3:55 pm in Kingwood, Texas after a courageous battle due to COVID complications. He was a member of St.Philip the Apostle Catholic Church in... View Obituary & Service Information

The family of Roger Paul Schuering created this Life Tributes page to make it easy to share your memories.

Send flowers to the Schuering family.