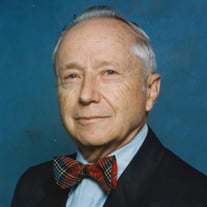 Roger E. Wehrs, M.D. died in Tulsa, Oklahoma on December 28, 2021 at age 96. He was preceded in death by his wife of 68 years, Mary Ann Wehrs (Pettee), as well as by his parents, Edward and Maurine Wehrs, his parents-in-law, Warren and Mary Pettee, his brothers, Richard and James Wehrs, sisters-in-law, Ruth Wehrs and Joan Pettee, brothers-in-law Richard and Warren Pettee, and his granddaughter, Jennifer Kreitzberg. Among his survivors are son Donald R. Wehrs and daughter-in-law Lorna Wood, of Auburn, AL, daughter Suzanne Kreitzberg and son-in-law Brian Krietzberg, of Portland, OR, grandchildren Sylvia Wehrs, William Wehrs, Paul Kreitzberg, and Joseph Kreitzberg, great-grandson John Kreitzberg, sisters-in-law Beverly Wehrs and Kay Pettee, and cousin Mary Tipton. Roger was born on March 26, 1925 in Seward, NE and grew up on the family farm near Milford, NE. After attending a one-room country schoolhouse, which he rode to on horseback, he graduated from Milford High School in 1943, the University of Nebraska at Lincoln in 1948, and the University of Nebraska Medical School at Omaha in 1952. After a year’s internship in Oakland, California, he served as a First Lieutenant in the U.S. Army in West Germany from 1953 to 1955, before becoming a resident specializing in ear-nose-and throat medicine under the mentorship of Dr. Gunnar Proud at the University of Kansas Medical School, Kansas City, Kansas between 1955 and 1957. In 1957 Roger opened a practice in Tulsa, which he soon limited to treating ear disease, injury, hearing loss, and related matters. One of the first physicians trained in using the microscope in ear surgery, he performed operations at Hillcrest, St. John’s, and then for many years exclusively at St. Francis. He had an office at 21st and Harvard until 1967, and then at the Warren Profession Building on Yale, until he retired in 1997. In addition to his private practice, Roger published some 25 articles on ear surgery in major medical journals as well as book chapters in medical textbooks. He was for many decades a featured speaker at medical conferences. He served as president and vice-president of the ear-nose-and throat professional organization, the Trilogical Society. He developed two innovative surgical procedures, one involving eardrum transplants to replace damaged eardrums, the other using knee cartilage to repair damaged ear canals. He helped develop commercially marketed artificial eardrum products, on which he held patents. He was invited to give guest lectures and perform guest surgery at major universities around the country, among them Harvard, Johns Hopkins, the University of Cincinnati, and the University of Alabama at Birmingham. For many years, he served as a clinical professor with the University of Oklahoma Medical School. For all his professional accomplishments, what mattered to him most were his patients, many of whose hearing he was able dramatically to improve, and in some case bring from a condition of near complete deafness to one of near normal hearing. Roger was a devoted husband, father, and grandfather. A longtime member of All Souls Unitarian Church, he was a man of wide-ranging interests and aptitudes, whether perfecting a lens-less camera to record his surgeries, restoring to mint condition a Model A once owned by his aunt, or building his own TVs and radios. With his wife, he was a tireless traveler, visiting every continent, including Antarctica. He shared his love of adventure and new experiences with his wife, children, and grandchildren. Memorial services are pending.

Roger E. Wehrs, M.D. died in Tulsa, Oklahoma on December 28, 2021 at age 96. He was preceded in death by his wife of 68 years, Mary Ann Wehrs (Pettee), as well as by his parents, Edward and Maurine Wehrs, his parents-in-law, Warren and Mary... View Obituary & Service Information

The family of Roger E. Wehrs created this Life Tributes page to make it easy to share your memories.

Send flowers to the Wehrs family.