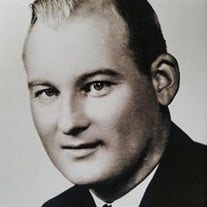 Rolland Argene (Rick) Bowers was born on July 16, 1933, near Holbrook Nebraska to Louis J. and Henrietta Bowers. He married Violet Travis on August 18, 1957. They adopted two children; Keli Michele, deceased, and Kevin Duane of Tulsa, Oklahoma. Rolland had one brother, Lloyd E. Bowers (deceased), and two sisters, R. Elaine Skiles of Franklin, Nebraska, and Wanda F. Watson of Townsend, Montana. They have three grandchildren – Regena Ward and Melissa Langley of Tulsa, Oklahoma, and Kendra Houser of Mathews, Virginia, and eight great-grandchildren. Rolland earned a bachelor’s degree in Business and Mathematics at the University of Nebraska-Kearney, a Master’s in Education Administration at the University of Northern Colorado, and a doctorate in Educational Administration from the University of Nebraska-Lincoln. He specialized in school finance. After serving two years during the Korean war with commendation, Rolland was an educator—starting as a teacher, principal, superintendent, distinguished regents service professor, and associate dean in Nebraska, Virginia, and Oklahoma. His last position was Associate Superintendent for Financial Services with the Tulsa, Oklahoma Public Schools. Rolland passed away on February 15, 2021, at the age of 87 years 6 months, and 30 days. A celebration of life for Rolland will be held at Asbury's Mason Chapel, on Tuesday, February 23, 2021, at 2 PM. Memorial Donations can be made to Asbury United Methodist Church for the Asbury Singing Ambassadors in Rolland's name.

The family of Rolland A Bowers created this Life Tributes page to make it easy to share your memories.

Send flowers to the Bowers family.