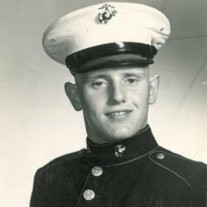 Ronald Theodore Grill born November 1940 died peacefully on November 25, 2013 after years of perseverance following a heart transplant eighteen years ago. Ron leaves behind four children and five grandchildren. Aaron and Judy Grill of Tulsa, Deron Grill and Kimberly Cain of Joplin, Cameron Grill of Tulsa and Ronda and Trent Scaggs of Yukon. Five perfect grandchildren Maggie Lynn, Isaac, Nadine, Miles and Riley Grill all of Tulsa. He is also survived by his brother David and Gillian Grill of Pennsylvania, his nephew Dr. Michael Grill of Connecticut and his Uncle Richard Shellenberger also of Pennsylvania as well as other family members in and around the Hamburg and Redding area. Born in Redding Pennsylvania Ron lead a very active childhood playing any and all sports that he could which lead to his love for the Philadelphia Eagles and inspired his desire to join the United Stated Marines. Ron served his country for six years and in that time was provided the opportunity to travel the world where he was stationed in Istanbul and was a proud member of the Honor Squad. Following his military career Ron moved his young family to the Philippines where he worked for the US Government. Shortly after the birth of his second son in 1971 Ron moved his family to Tulsa to start his career with McDonnell Douglas. After struggling with heart troubles for a number of years he was blessed to receive a lifesaving heart transplant in 1995. Ron never gave up and stayed in contact with as many of the local heart recipients that he could giving them support and companionship. He enjoyed his grandchildren and loved to bring them small gifts in hopes of making them smile. Over the last few years Ron’s body had slowed but his mind was still active and his craving for family was stronger than ever. Ron is at peace now and is able to kick the soccer ball, eat his pies and there is no doubt in our minds that he is as rich as he had always hoped to be. The family would like to thank the staff at St Francis ER, Neuro-ICU and his large team of Doctors that work very hard to keep Ron going. In lieu of flowers please consider a donation to Lifeshare of Oklahoma or the American Heart Association.

The family of Ronald Theodore Grill created this Life Tributes page to make it easy to share your memories.