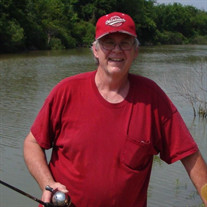 Ronald Wayne Welch (Sr.) of Coweta, OK passed away Sunday, January 16, 2022. He was 70 years old. Ron was born on June 19, 1951 to Bonnie Oleta (Cherry) Welch and Tom Junior Welch. He graduated from Broken Arrow High School in 1969 and was a life-long resident of the East Broken Arrow & Coweta area. Ron met Mary Pearson at Oak Grove Church in Broken Arrow while they were teenagers. They later married there in 1969. Ron and Mary were married for 43 years until her death in 2012. They had five children: Ronnie Jr, Ricky, Janet, Rusty, and Kaci. Ron was proud of all his kids and did everything he could to support them. Ron was a man of many talents and made his living from construction and welding jobs. In his youth, he worked in masonry and construction. He had an unmatched skill for rock work, laying rock on several houses in the Broken Arrow area, and later designing his own dream home with many custom rock accents. He also worked for Dresser-Rand as a welder in the 1980s. In the 1990s, he started his own welding fabrication business, Welch Sheet Metal, which he operated with his sons until his retirement in 2013. Some of Ron’s hobbies included hunting, fishing, golf, music and Harley-Davidson motorcycles. He enjoyed hunting and fishing with his Dad, brother, kids, and grandkids. He also enjoyed playing golf with his Dad, sister, kids, and grandkids. He had a natural talent for music and played guitar in church throughout his life. As a teenager, he learned how to play guitar by ear and was known as one of the best thumbpickers around. He also owned several Harley-Davidson motorcycles throughout his lifetime and always enjoyed taking trips or just riding them around town. Ron was the King of giving out nicknames, but he himself was also known by many names – Ron or Ronnie to most, Ronnie Wayne to his mother, Dad or Daddy to his children, but one of his favorite names was PaPa. He had 11 grandchildren – Anthony, Zaccary, PJ, Paul, Aubree, Justin, Nikki, Jacob, Grant, Eli, and Nate – and he had a special bond with each of them. It was not uncommon for him to show up unannounced with chocolate milk and donuts or other sweet treats for them. Ron was a jokester at heart. He was quick-witted and loved to have fun and be silly, but he also understood the importance of hard work. He had a very giving spirit and always did his best to take care of those around him. Ron was a true family man and leaves behind an innumerable amount of cherished memories in the hearts of his family and loved ones. He will be missed greatly. Ron was preceded in death by his parents, Tom and Bonnie Welch, his wife, Mary Welch, a son, Ricky Welch, and a grandson, Anthony Welch. He is survived by his brother, Charles (Chuck) Welch and wife Sherrie of Beggs, OK, two sisters, Donna Roy of Tishomingo, OK and Kathy Welch of Broken Arrow, OK, two sons, Ronald W. Welch Jr. and wife Bonnie of Bristow, OK, and Russell Welch of Broken Arrow, OK, two daughters, Janet Latendresse and husband George of Coweta, OK, and Kaci Hubbell and husband Derek of Guthrie, Ok, 10 grandchildren, 6 great-grandchildren, and many nieces/nephews and other extended family. Ron wished to be cremated with his remains buried next to his wife at Floral Haven Cemetery in Broken Arrow, OK. The family will host a memorial service to be planned at a later time.

Ronald Wayne Welch (Sr.) of Coweta, OK passed away Sunday, January 16, 2022. He was 70 years old. Ron was born on June 19, 1951 to Bonnie Oleta (Cherry) Welch and Tom Junior Welch. He graduated from Broken Arrow High School in 1969 and was a... View Obituary & Service Information

The family of Ronald Wayne Welch created this Life Tributes page to make it easy to share your memories.

Send flowers to the Welch family.