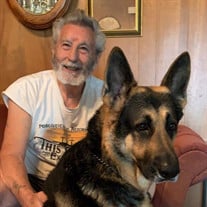 Ronnie (Ron) Brock, 82, of Broken Arrow, OK, entered his heavenly home on August 11, 2020. He was born to Walter and Virgie (Wells) Brock on January 16, 1938 in Cincinnati, Ohio. Ron retired from Steelcraft, a manufacturer of steel doors and other products for institutional, commercial, and industrial businesses, located in Cincinnati. He served as an Engineered Order Technician Supervisor. Ron was loved by all who knew him. He looked forward to bowling on his senior league at Broken Arrow Lanes every Tuesday and Thursday and apart from the bowling itself, he enjoyed his friends on the league. He faithfully mowed lawns and did yardwork for neighbors, and was always ready to help anyone in need at a moment’s notice. Of course, Ron loved a good game of cards around the dining room table with friends and family or a competitive game of golf on his computer, and especially loved telling a story that ended up being a joke. When he spotted something at a garage sale he often had someone in mind who would benefit from his great buy. Ron was current on his Oklahoma handgun license, volunteered as a security guard, and at one time helped train police dogs. He was quietly generous to many, many people and would always say, “God told me to give this to you,” to whomever he was blessing. He frequently had a kind or uplifting word for others. Ron faithfully attended Grace Church for many, many years and faithfully volunteered countless hours duplicating sermons for church members and Bible teachings for Bob Yandian Ministries, which have literally gone around the world. A man of prayer, if you asked Ron to pray for you, he would! He also prayed for many who will never know until we get to Heaven. He loved the Word of God and would always share about the most recent teaching he had listened to. His German Shepherd, Rocky, was his pride and joy and always by his side. Above all else, Ron loved his Savior, Jesus Christ. Ron was preceded in death by his wife, Alice Brock; his daughter, Edye (Brock) Minton, and his parents, Walter and Virgie Brock. Ron is survived by four sisters, Wanda, Patsy, Jean, and Phyllis and many, many nieces and nephews and four unofficially adopted grandchildren and their children. In Lieu of flowers the family requests you make donations to your favorite Christian charity. The service will be webcast at the following link: http://webcast.funeralvue.com/events/viewer/35240/hash:41DD0530382BBDA4

Ronnie (Ron) Brock, 82, of Broken Arrow, OK, entered his heavenly home on August 11, 2020. He was born to Walter and Virgie (Wells) Brock on January 16, 1938 in Cincinnati, Ohio. Ron retired from Steelcraft, a manufacturer of steel doors and... View Obituary & Service Information

The family of Ronnie Walter Brock created this Life Tributes page to make it easy to share your memories.

Send flowers to the Brock family.