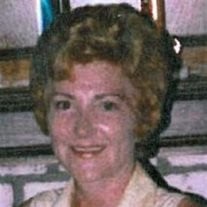 Rosalie Heflin, 83, passed peacefully away on Friday, March 22, 2013 in Tulsa, OK. Rose was born in Salem, IL on August 26, 1929, the youngest of four daughters born to the late Alpha Elizabeth Tate and John Wesley Woodward. She is preceded in death by her sisters Ruth Sargent, Margaret Hooten, and Aline Griffith. As a girl in Kell, Rose met her lifelong love, Irwin Eugene Heflin (Gene). After revealing her true age when it became apparent that her father would have to sign in order for her to get married, Rose and Gene wed on August 31, 1946. Rose and Gene have two daughters, Glenna and Pam. While caring for her girls, Rose attended Beauty School and eventually opened a popular beauty parlor for local women in Salem in her home. After the girls were grown, Geneâ??s accounting position for Texaco took the family to Tulsa, OK, then Denver, CO, and eventually they settled in Broken Arrow, OK. In Oklahoma, Rose was an active member of the Womenâ??s Golf Association at Indian Springs Country Club for many years. Rose also enjoyed painting, playing bridge, caring for her dogs, and spending time with her grandchildren and great grandson. The Heflins are members of the First United Methodist Church in Broken Arrow. Rose is survived by her husband, Gene; daughter, Glenna Arnott; daughter and son-in-law, Pam and John Clifton; granddaughter Heather Shavney (her husband Justin); grandson, Cole Clifton; great grandson Creek Shavney and soon-to-be-born great granddaughter and namesake Rosalie Shavney; sister in law Mary Dethrow (her husband Clint); nephews James Alexander (his wife Linda) and Charles Howard (his wife Cindy) and their families; as well as other family members and many friends. A memorial service will be held Wednesday, March 27, 2013 at 3 pm in the chapel at Floral Haven Memorial Gardens, 6500 S. 129th E. Ave., Broken Arrow, OK 74012. In Lieu of flowers, donations can be made to ARF, the Animal Rescue Foundation of Tulsa.

Rosalie Heflin, 83, passed peacefully away on Friday, March 22, 2013 in Tulsa, OK. Rose was born in Salem, IL on August 26, 1929, the youngest of four daughters born to the late Alpha Elizabeth Tate and John Wesley Woodward. She is preceded... View Obituary & Service Information

The family of Rosalie Heflin created this Life Tributes page to make it easy to share your memories.