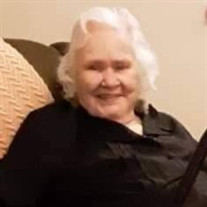 Lucille Kirkendoll, a retired Bixby Schools bus driver and long-time resident of Bixby, Oklahoma, passed from this life unexpectedly on January 18, 2022, at the age of 84. Lucille was born on April 20, 1937, in Kennett, Missouri to her parents Ewin Hood and Beulah (Brewer) Hood. Lucille is survived by her two children, daughter Julie and her husband John Howell, of Bixby, Oklahoma, son Rick and his wife Leah Kirkendoll, of Broken Arrow, Oklahoma; sister’s Snookie Brown, of Watonga, Oklahoma, Rhonda Stamm, of Fort Supply, Oklahoma, Denise Wallace, Broken Arrow, Oklahoma; grandchildren Justin Kirkendoll, Tiffany Simpson and her husband Jory, Jake Kirkendoll and his wife Monica, Zack Kirkendoll and his girlfriend Christina Kelly, John Howell and his wife Taylor, Brandon Howell and his wife Ryann, and Adam Phillips; great grandchildren Zoey, Cooper, Kyle, Zander, Alyssa, Courtney, Emberly, and Kingsley; as well as many friends and extended family members. Lucille was preceded in death by her parents Ewin Hood and Beulah (Brewer) Hood, husband Art Kirkendoll, one daughter Shelly Kirkendoll, siblings Leola Miller, Billy, Dwight Hood, Bobby Hood, Betty Kirkendoll, Jerry Hood, Judy Lesperance, two great grandchildren Logan and Connor. Lucille grew up in Watonga, Oklahoma where she met the love of her life Art Kirkendoll, they were married on June 6, 1957. Lucille and Art enjoyed watching their children excel in sports, and they never missed a game. Many knew her as a bus driver, but mostly, she was known as a sports mom and coach. Lucille enjoyed reading, games on her tablet, and had her favorite TV shows, if John Wayne was on, she watched it. Also, Lucille enjoyed being onery, she was known for her quick wit. She was the happiest when she was surrounded by her family, especially her grandchildren and great grandchildren. In lieu of flowers, please send a memorial gift in memory of Lucille Kirkendoll to Bixby Education Endowment Fund, 109 N. Armstrong, Bixby, Oklahoma 74008, or you may visit https://tinyurl.com/bixbyBEEF. All services will be private.

Lucille Kirkendoll, a retired Bixby Schools bus driver and long-time resident of Bixby, Oklahoma, passed from this life unexpectedly on January 18, 2022, at the age of 84. Lucille was born on April 20, 1937, in Kennett, Missouri to her parents... View Obituary & Service Information

The family of Lucille Kirkendoll created this Life Tributes page to make it easy to share your memories.

Send flowers to the Kirkendoll family.