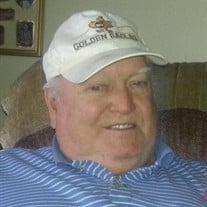 Roy Carl “Buddy” Chartier, 82, passed away December 12, 2020. Buddy was born in Coweta, Oklahoma on July 4, 1938 to Carl and Trudie Chartier. Buddy served in the Army and always enjoyed sharing a birthday with The United States of America. On December 24, 1957, Buddy married the love of his life, Judith “Judy” Anita Capps. Buddy and Judy spent their entire 63 years of marriage living in Tulsa. In 1963, Buddy and Judy’s brother Dusty Capps, began building and driving race cars around the Oklahoma area. Buddy was an accomplished fabricator and won awards for the quality of his race cars. He even worked on cars for local racers. Buddy retired as a machinist, but continued to get the most out of life playing bluegrass music with Judy and friends. For over 15 years, Buddy and Judy could be found on Saturday nights at the Hickory House in Sapulpa, Oklahoma, where Buddy would be playing his guitar while Judy would play her bass and sing. Buddy and Judy played with their band, Hills of Home, all over Green Country, entertaining audiences with their talent and humor. Every once in a while, you could see them on local television stations playing their music as invited guests. They even made an appearance on America’s Funniest Home Videos, thanks to Buddy’s never ending humor. Buddy (aka Boompa and Bubby) spent his golden years enjoying his grandchildren, great-grandchildren, and all of the “bonus” children he and Judy welcomed into their home daycare over the past 40 years. Buddy is survived by his cherished wife, Judy; sister Paula Denham; son Rodney and his wife Karen of Broken Arrow; daughter DeeDee Turley of Mannford; 6 grandchildren; 8 great grandchildren; brothers-in-law Frosty & Dusty Capps, and Dusty’s wife Sherry; as well as numerous nieces and nephews. Roy was preceded in death by his beloved son Roy Carl Chartier II; parents Carl and Trudie; sisters Melba Barnes, Earlene Cather, Alene Denny, and Beverly Jones. Due to Covid restrictions, no service is planned at this time. The family would like to express their sincerest gratitude for the many people who have reached out during this difficult time.

Roy Carl &#8220;Buddy&#8221; Chartier, 82, passed away December 12, 2020. Buddy was born in Coweta, Oklahoma on July 4, 1938 to Carl and Trudie Chartier. Buddy served in the Army and always enjoyed sharing a birthday with The United States of... View Obituary & Service Information

The family of Roy Chartier created this Life Tributes page to make it easy to share your memories.

Send flowers to the Chartier family.