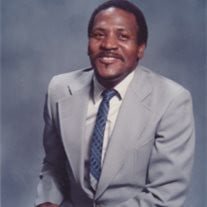 Today we celebrate the life of our loved one, Roy Lee Johnson. Roy was born on January 26, 1952, to Eddie Lee & Reola Johnson in Tulsa, Oklahoma. He was a member of the St. Luke Baptist Church where he accepted Christ in his life and was baptized under the late Pastor U.J. Wimbush. During his life he renewed his faith in God several times. Roy attended Ralph J. Bunche Elementary School, Marian Anderson Junior High School, Booker T. Washington High School, and completed his education at Central High School. During his teenage years, he worked for Borden’s Cafeteria and the Ranch House Steak House. Roy exhibited excellent work ethics and skills. Upon the completion of high school, Roy joined the United States Air force and served our country for four years. During his tenure he married Beverly Fields of Kokomo, Indiana; two daughters were born to this union. After his honorable discharge, Roy worked for Young’s Tire Service and various other corporations. He remained a residence of Tulsa, Oklahoma until his passing. Throughout Roy’s life, he was a husband, a father, a brother, and a friend. Roy had a kind heart and he was a very caring and a very giving person. If the old saying (he will give you the shirt off of his back) is true, then that saying describes Roy to a T, as he never hesitated to give of his time, his energy, and his resources to help anyone in need. When he was in a position to help someone in need of a place to sleep for a night, he would show hospitality and open up the doors of his home. Roy kept himself neat and clean, and he kept a clean house. He was a hard worker and could get a job done quickly. He loved disassembling electronic equipment to explore and fix them, and reassembling them again. He loved eating and hanging out with his friends. But most importantly, he loved his family and he would go the distance to protect and defend them. If any of his family members were in danger, Roy would come to their rescue in a heartbeat. He earned the slogan, “Don’t mess with Roy Johnson”. Roy transitioned into eternity on Sunday November 17, 2019. He was preceded in death by his father (Eddie Lee Johnson), his mother (Reola Richard), and a special uncle and aunt (Everst & Annie Skillern). Roy leaves to cherish his memory: his two daughters, Eina Marshelle Johnson & DeAndra Monique Johnson of Kokomo, Indiana; three brothers, Eddie Lee Choates (Stephanie) of Tulsa, OK, Kenneth Earl Johnson of Houston, TX, and Alexis Paris of Oakland, CA; three sisters, Dovie Mae Johnson of Milwaukee, WI, Della Marie Gilford (Steven) of Neosho, Missouri, and Ella Willeen Stokes of Tulsa, OK; 6 grandchildren, 4 great grandchildren; and a host of nieces, nephews, cousins, and friends. Roy will be missed by all of us.

Today we celebrate the life of our loved one, Roy Lee Johnson. Roy was born on January 26, 1952, to Eddie Lee & Reola Johnson in Tulsa, Oklahoma. He was a member of the St. Luke Baptist Church where he accepted Christ in his life and was baptized... View Obituary & Service Information

The family of Roy L. Johnson created this Life Tributes page to make it easy to share your memories.

Today we celebrate the life of our loved one, Roy Lee Johnson....