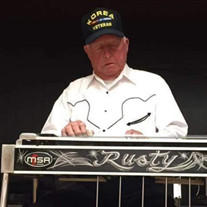 Roy "Rusty" Longstreet McGhee, Jr., 88 of Tulsa, Oklahoma passed from this life on Sunday, April 24, 2022, at his home surrounded by his family. Roy was born on May the 29th of 1933 in Dawson, Oklahoma to his parents, Roy Longstreet McGhee, Sr. and Lucile O'Brien McGhee. On January the 17th of 1975, he took the hand of Dianna "Kay" Daniel, and they were wed. Over the next 47 years they built a family and shared in many memorial moments. Roy graduated from Will Rodgers High School and married Sue White of Tulsa and from there was drafted into the US Army and served during the Korean War. He had his own construction business from the 1950s to the 1970s. Roy & Sue had two children, Cathy & Sandy. Later he married Kay Daniel on January 17, 1975, in Tulsa and had three children, Toni, Roy & Rochelle. In 1975 he went to work for the City of Tulsa where he and retired in 1997. He only stayed retired a couple of years before he went to work for Tulsa & Creek County Senior Nutrition where he delivered meals to homebound seniors and was employed in the end. Now, let us talk about "Rusty" McGhee. He started playing pedal steel guitar at the age of seven. Rusty took lessons from Leon McAuliffe, of The Texas Playboys, and history was set in motion. Rusty has played with some big names in his day, and you could usually find him in the middle of the music scene in Tulsa and surrounding states, or on radio and TV shows, such as the John Chick Show. There are truly too many artists to name them all, but Stonewall Jackson comes to mind and even tried to recruit him to travel with him, but Rusty decided to stay in Tulsa. Instead of going on the road, Rusty’s dreams of playing music transpired into playing with many bands locally, but the longest was with his band, The Mavericks. Rusty has a musical legacy that will live on with two generations of steel guitar players in his Son, Roy Lee, and his Grandson, Conner Roy. Now the Mavericks are back together in what we are betting is the best jam session yet. Rest easy Rusty....play one for us. Roy is survived by his loving wife, Kay McGhee of the home; five children, Cathy Thomas of Broken Arrow, Oklahoma, Roy L. "Sandy" McGhee and his wife Tina of Tulsa, Oklahoma, Toni Pendergrass and her husband Danny of Broken Arrow, Oklahoma, Roy Lee McGhee and his wife Emily of Dawson, Oklahoma and Rochelle Cook and her husband Stephen of Sperry, Oklahoma; one brother, Robert McGhee of Dawson, Oklahoma; twelve grandchildren, Kari Cordell, Lauren English, Wendy Sumpter, Michael McGhee IV, Brittany Lambert, Justin Mayfield, Autumn Mayfield, Conner Roy McGhee, Cayden McGhee, Joey Cook, Jacob Cook and Jaycee Cook; 13 great-grandchildren and many friends and extended family members. He was preceded in death by his parents, Roy and Lucile McGhee and one sister, Frances McGhee. Visitation will be held from 2-6 p.m. on Thursday, April 28th, 2022, at Floral Haven Funeral Home. Funeral services will be held at 2:00 p.m. on Friday at Floral Haven's Rose Chapel with burial to follow at Floral Haven Memorial Gardens.

Roy "Rusty" Longstreet McGhee, Jr., 88 of Tulsa, Oklahoma passed from this life on Sunday, April 24, 2022, at his home surrounded by his family. Roy was born on May the 29th of 1933 in Dawson, Oklahoma to his parents, Roy Longstreet McGhee,... View Obituary & Service Information

The family of Roy "Rusty" Longstreet McGhee Jr. created this Life Tributes page to make it easy to share your memories.

Send flowers to the McGhee family.